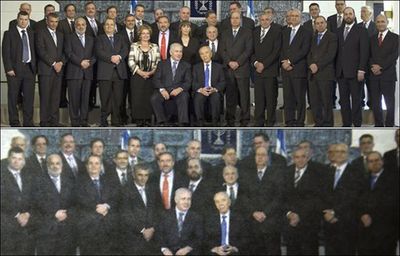 Limor Livnat and Sofa Landver were grouped with the rest of the 30-member cabinet for their inaugural photo.

But Yated Neeman newspaper digitally changed the picture by replacing them with two men. The Shaa Tova newspaper blacked the women out.

Publishing pictures of women is viewed by many ultra-orthodox Jews as a violation of female modesty.

Other Israeli papers reprinted the altered images next to the original photos, with one headlining it "Find the lady".

The ultra-Orthodox community separates itself from mainstream society through its traditional religious practices and distinctive attire of black hats, coats and sidelocks for the men and long skirts and sleeves for the women.

Restrictions include using only Kosher telephones, and not accessing websites with content deemed inappropriate.