This non-apology apology is from JTA president Elisa Spungen Bildner. Who's she non-apologizing to? You.

A fundraising email appeal JTA sent out Friday under my signature contained words I did not specifically approve, words that seemed to criticize bloggers and Twitterers.  Understandably, they ruffled a few feathers in the blogosphere.

I know that was not the intention of JTA's staff, nor mine. I am a strong supporter of new media  and JTA spends a considerable amount of staff resources producing three very popular blogs  Capital J, the Fundermentalist and The Telegraph. We are on Facebook and recently covered the Jewish Funders Network annual conference extensively on Twitter.

JTA's point was not to insult new media practitioners but to stress the importance of supporting in-depth reporting, too. Inartful words or not, the rationale behind JTA' s fundraising appeal remains: Quality journalism today is reeling from unprecedented financial pressure  and JTA is no exception. We are appealing to our readers to support us, so JTA can remain strong.

On behalf of my staff, I apologize if we have unintentionally offended anyone. But I am confident and proud of JTA’s commitment to pursuing both traditional journalism and the rich new forms of reporting that the Internet affords.

To those of you who choose to support us, I am deeply grateful. Best wishes to all for a lovely Passover holiday.

• It has a clearly biased reporter, Sue Fishkoff, covering Chabad.

• And it regularly steals borrows from bloggers, taking their work, rewriting it, spiffing it up a bit and claiming it as its own, without even the courtesy of attribution or a link.

None of that should take away from the good the JTA does – however slight that good may sometimes be.

The points Elisa makes about the need for a viable JTA are all true – but those points should not conceal the fact that the JTA falls far below that level of news delivery. Some of this is clearly due to financial woes. But the rest is due to politics, bias and sloppiness.

A quick example: The JTA had the best Jewish coverage of the Agriprocessors raid and its aftermath, until Sue Fishkoff was put on the story. From that point onward, the JTA's coverage shriveled, and what it did publish was largely off base (and at least one story that wasn't was stolen borrowed from me).

A real news organization would have noticed this and corrected it, perhaps by sequestering Fishkoff, perhaps by firing her. The JTA did neither. In fact, the JTA did nothing.

That doesn't mean you should not support the JTA.

Again, I agree the JTA can and should play a vital role in American Jewish – and in American – life.

But no one, especially Elisa Spungen Bildner, should have any illusions about what the JTA currently is, or about what it could and should be.

Now here's the email Elisa sent but is now trying to claim she didn't actually write, send or approve. 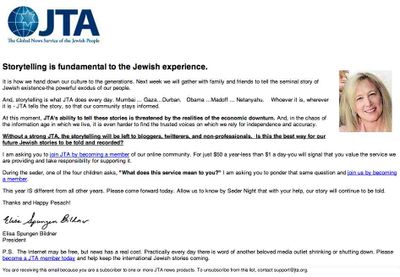 This non-apology apology is from JTA president Elisa Spungen Bildner. Who's she non-apologizing to? You.