The Mystic of the Lower East Side

One of the "big secret heroes" of our time. 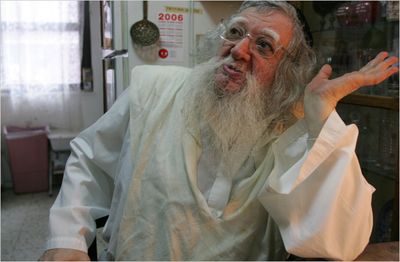 Lionel Ziprin, Mystic of the Lower East Side, Dies at 84
By WILLIAM GRIMES

“We are not after all intended to be consumed.”

So begins Lionel Ziprin’s “Sentential Metaphrastic,” a “poem in progress” of more than a thousand pages. “I reduced it to 785 pages,” Mr. Ziprin told The Jewish Quarterly in 2006. “I call it the longest and most boring poem since Milton’s ‘Paradise Lost.’ ”

Many more poems by Mr. Ziprin remain to be discovered, inscribed on spiral-bound notebooks and stuffed into a closet in his apartment on the Lower East Side of Manhattan. And that is nowhere near the half of it. Also in the apartment are the Jewish liturgical chants intoned by Mr. Ziprin’s grandfather, untold hours of sacred music that Mr. Ziprin tried for more than half a century to bring to the wider world.

This legacy now passes to his family — whether to delight or puzzle posterity, no one knows. Mr. Ziprin, a brilliant, baffling, beguiling voice of the Lower East Side and the East Village in all its phases — Jewish, hipster and hippie — died last Sunday in Manhattan. He was 84. The cause was chronic obstructive pulmonary disease, his daughter Zia Ziprin said.

He ran his apartment, on Seventh Street in the East Village, as a bohemian salon, attracting a loose collective that included the ethnomusicologist Harry Smith, the photographer Robert Frank and the jazz musician Thelonious Monk, who would drop by for meals between sets at the Five Spot. Bob Dylan paid the occasional visit.

There the art of conversation took a backseat to the art of listening to Mr. Ziprin hold forth for hours at a stretch on magic, interplanetary rhythms, angels, apparitions and Jewish history.

“He was larger than life and so far beyond a certain kind of description that I am bamboozled,” said Ira Cohen, a longtime friend. “He was much larger than a poet, though that’s hard for me to say, as a poet. He was one of the big secret heroes of the time.”

Often categorized as a beatnik, he created an artistic circle that overlapped with the worlds of jazz and beat poetry but remained distinct and apart. A poet prey to visions and hallucinations, a philosopher, a Jewish mystic with a deep understanding of the kabbalah, an enthusiastic consumer of amphetamines (legal at the time) and peyote (also legal) — he was all of these, and something else besides.

“He combined Old World mysticism and New World craziness,” said the poet Janine Vega. “He really was one of the great white magicians of the era.”

Mr. Ziprin was born on the Lower East Side and, after his parents separated when he was a small child, lived with his mother and her parents. The decisive influence on his life was his maternal grandfather, the rabbi Naftali Zvi Margolies Abulafia, an immigrant from Galilee who founded the Home of the Sages of Israel, a yeshiva on the Lower East Side.

The home atmosphere was devout.

“I thought I was living in the Bible,” Mr. Ziprin said in a documentary produced by Jon Kalish for public radio in 2006. “ My grandparents were like biblical people. The only problem I had as a child, I looked outside, and there were automobiles. There’s a big contradiction.”

While undergoing a tonsillectomy, young Lionel — called Leibel or Leibele by his family — was badly overanesthetized. After emerging from a 10-day coma he developed St. Vitus’s Dance and epilepsy. He was seized by fits of uncontrollable laughter and experienced hallucinations. For the rest of his life, he saw visions and conversed with the spirit world.

Physically unfit for military duty, Mr. Ziprin began writing poetry after attending Brooklyn College and worked at an assortment of extremely odd jobs. He helped create a short-lived puppet show called “Kabbalah the Cook” for television. For $10 apiece, he wrote the text for a series of war comic books published by Dell.

In 1950 he married Joanna Eashe, a dancer who made a living as a hand and foot model. In the early 1950s the couple started a totally unsuccessful greeting card company, Ink Weed Arts. She died in 1994.

In addition to his daughter Zia, of Manhattan, he is survived by a brother, Jordan, of Phoenix; another daughter, Dana Ziprin of Richmond, Calif.; two sons, Leigh and Noah, both of Berkeley, Calif; and three grandchildren.

Mr. Ziprin’s poems, including “Math Glass” and “What This Abacus Was,” appeared here and there in magazines like Zero, but he barely bothered to pursue a career. A poet in the prophetic tradition, he did not so much write as open himself up to otherworldly voices.

“He would read the stuff we published and would have no idea that he’d written it,” said Judy Upjohn, who, with Sandy Rower, published a selection of Mr. Ziprin’s verse in “Almost All Lies Are Pocket Size” (Flockaphobic Press, 1990).

Clayton Patterson, who is writing a history of the Lower East Side, filmed Mr. Ziprin reading his “Book of Logic ” and organized a screening of 10 two-hour installments at Anthology Film Archives in 1989. “The first night there was a full house,” he said. “By the third night there were three people, besides Lionel and myself. That ended the series.”

Mr. Smith, the ethnomusicologist who produced the seminal Anthology of American Folk Music for Folkways Records, heard Mr. Ziprin’s grandfather chanting at a public celebration and became obsessed. Setting up sound equipment in the rabbi’s yeshiva, he spent two years recording hundreds of hours of Hebrew liturgical chants, along with Arabic songs and Yiddish stories, which were distilled into 15 long-playing records.

Shortly before his death in 1955, the rabbi begged his grandson to bring the records to a wider audience, inspiring a half-century quest whose end remains uncertain. Folkways released one album from the set, but for religious reasons, family members objected to further distribution of the material.

In the late 1960s Mr. Ziprin’s wife took the children and moved to Berkeley, Calif., plunging Mr. Ziprin into a spiritual crisis. It was resolved when, acting on instructions from his grandfather in a dream, he returned to the Judaism of his youth and to the Lower East Side, moving into his mother’s apartment on East Broadway to care for her until her death in the late 1980s.

From the mid-1970s until his death, Mr. Ziprin spent his days studying the Torah and other texts at what was once his grandfather’s yeshiva. He held court at his apartment. He scribbled thoughts on postcards and sent them to just about anyone.

He also searched for someone willing to produce his grandfather’s records. As the years went on, and some of the tapes were lost to fire, flood and theft, the mercurial and often cantankerous Mr. Ziprin often seemed to be sabotaging his own cause, eager to disseminate his grandfather’s legacy but reluctant to let it go.

Briefly it looked as if the composer John Zorn had secured the rights to release the records, but Mr. Ziprin could not let go. At his death, the Idelsohn Society for Musical Preservation had made a compilation CD from the material that seemed to please Mr. Ziprin, clearing the way for the production of a full boxed set.

A man of many words, he managed to write his self-portrait in just a few:

I have never been arrested. I

have never been institutionalized.

I have four children. I am in

outsider. I am a citizen of the

republic and I have remained

anonymous all the time by choice.

The Mystic of the Lower East Side

One of the "big secret heroes" of our time.