Judge rules song, based on Disney's "When You Wish Upon a Star" humorous, use proper.

The actual clip from the show has been removed by YouTube and other online video sights because Fox is claiming copyright infringement – a claim that clearly would not hold because the song in a small portion of the entire show and is the focus of a court case and news coverage.

The entire show, including the song, can be seen on FamilyGuy.com. 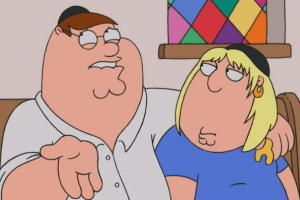 Heeb Magazine has the story:

Family Guy “I Need A Jew” Copyright Lawsuit Thrown Out

When Peter Griffin sang the song "I Need a Jew" on Family Guy, not everyone was amused. The song, which begins with Peter singing out the window while gazing longingly at the nighttime sky, is an arms-length parody of "When You Wish Upon a Star." The copyright holders of the classic song from Disney’s Pinocchio filed an infringement lawsuit against Fox, which produces and broadcasts the show.

Yesterday, a Federal District Court judge dismissed the case, finding the song to be humorous and sufficiently different in character from the original. Judge Deborah Batts wrote that the original song’s wholesomeness makes it fair game for “ridicule by parodists seeking to take the wind out of such lofty, magical or pure associations.”

In the episode, titled "When You Wish Upon a Weinstein," Peter looks for a Jew to manage his money. The song ends with a knock on Peter’s door, and when he opens it, a character named Max Weinstein says his car broke down and asks to borrow the phone. Peter then turns to the camera and sings, "Now my troubles are all through/I have a Jew."

Where to find
A Baum or Steen or Stein
To teach me how to whine and do
my taaaaaxesss...

"When You Wish Upon a Star" lyrics:

Judge rules song, based on Disney's "When You Wish Upon a Star" humorous, use proper.