Rabbi Moshe Zigelman, one of two co-conspirators who pleaded guilty last June in a tax fraud and money laundering scheme, was sentenced in federal district court today to 24 months in prison.

The scheme was set up to fund the charities and school of the Spinka sect, an ultra-Orthodox group that originated in 19th century Romania and has adherents in Israel, Europe and Brooklyn. 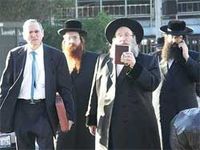 Speaking through an interpreter, Zigelman reiterated his admission of guilt and his desire for leniency prior to sentencing by drawing a parallel to Kol Nidre and teshuvah> (atonement). “I understand I have sinned against the American government. Therefore, I accept and acknowledge my behavior. I have to make amends for what I did,” he said.

Zigelman is the assistant to the Brooklyn-based Chasidic sect’s Rabbi Naftali Tzi Weisz; the pair were arrested Dec. 19, 2007, in Los Angeles on charges that they solicited millions of dollars in contributions for five Spinka charities with the understanding that the organizations would issue a receipt for the full amount and then secretly refund between 80 percent to 95 percent of the original contribution back to the donor.

According to the federal indictment, the scam started in 1996 and continued until 2007, laundering money back to donors through a network of Los Angeles businesses, including some in and around the downtown jewelry district, as well as through Tel Aviv-based United Mizrahi Bank and its Los Angeles branch.

Zigelman, whom many described in letters to the court as an experienced fundraiser focused on charitable giving, helped solicit more than $8.7 million, of which $750,000 was kept by Spinka charities.

Only two men pled guilty. In addition to Weisz, four local men were indicted in 2007—Yaacov (Yankel) Zeivald, a self-described sofer (scribe) from Valley Village; Yosef Nachum Naiman, owner of Shatz Et Naiman, d.b.a. Jerusalem Tours; Alan Jay Friedman, a businessman from Pico-Robertson; and Moshe Lazar, owner of Lazar Diamonds will face trial on June 19. Five Spinka charities, all based in Brooklyn, all have been named as defendants, as well. Joseph Roth, an Israeli banker who last June pleaded guilty for his role in the alleged conspiracy, was sentenced 14 months and released on time served.

Lawyers for Zigelman portrayed him as a servile do-gooder with below-average IQ who was focused on raising money for schools.

Prosecutor Dan O’Brien said Zigelman worked to benefit the Spinka community at the expense of other American communities.

During Monday’s sentencing hearing, District Judge John F. Walter said that Zigelman, as the No. 2 man in the operation, was well aware of his role in a simple criminal tax violation.

“It’s difficult to understand how such an individual could lose his moral compass,” Walter said.