In this economic crisis, the leaders of Satmar, who defiantly never went to college, are running rings around their more modern brothers and sisters who have advanced degrees and invested with Bernie Madoff. Mainstream Jews are debating hot to steer Jewish education through the crisis, perhaps with tax credits, or the creation of Hebrew-emphasis public charer [sic] schools, like the Arabic public school in Brooklyn. Meanwhile, Satmar, who figured this out 15 years ago, scored $6.3 million from the stimulus bill for Kiryas Joel’s all-Jewish public school.

The school, with a $13 million budget, has 280 students, all of them with special needs, some with dramatic physical disabilities. More than 900 students in the private Kiryas Joel yeshivas receive remedial support in the public school that has more staff than full-time students.

Other Jewish schools will benefit from the stimulus, in various ways, but no school in the area, public or otherwise, will be cashing in like Kiryas Joel. The upstate Times Herald-Record (Feb. 12) reports that although Kiryas Joel is the smallest school district in Orange, Sullivan and Ulster counties, it is getting more stimulus school funding than Newburgh ($5.5 million) for 12,230 public school students, or Monroe-Woodbury ($2 million) for 7,500 students.

What helped Kiryas Joel is that it is at the top of the list for Title 1 low-income students (it was recently ranked by the Census Bureau as the single poorest community in the United States) and the Individuals With Disabilities Act.

What makes this a curious media story, however, is the fact that, not that long ago, when every major news organization in the region was covering the feud between the two rival Satmar rebbes, just about every single story made a point of how wealthy Satmar was. The Daily News headlined, “Grand rebbe’s sons feud over $500 million empire.”

The Jerusalem Post, in 2006, reported on “Satmars’ extensive assets.”

JTA, the Jewish news service, reported in 2007 that what was at stake in the feud was “control over the group’s vast real estate holdings, estimated to be worth hundreds of millions of dollars.”

Despite all the papers, Jewish and otherwise, that described the vast assets, only the The Times Herald-Record is still paying attention. According to the Census, Kiryas Joel has the highest percentage of food stamp recipients. Only one other place in the United States has a lower median income than Kiryas Joel’s $15,848. What happened to the half-billion in communal assets? Is it so lacking in liquidity, or were those media reports misleading, bordering on the stereotype that nothing could motivate a chasidic feud but money? No one is putting two and two (or $500 million and $15,848) together. Certainly makes you want to meet Satmar’s accountant.

Stimulus — spiritual stimulus — can come with hard times. The historic Jewish revival of the Upper West Side in the 1970s would not have been possible if rents weren’t in free-fall, allowing for an infusion of writers, artists and students who, with some of the older residents, reinvented a neighborhood in decline.

In line with what Jews learned in several New York neighborhoods, Richard Florida explains in The Atlantic Monthly (March) how a crash could reshape a city for the better. “The great urbanist Jane Jacobs,” he writes, “argued that the jostling of many different professions and different types of people, all in a dense environment, is an essential spur to innovation.” Innovation “is what keeps cities vital and relevant. ... The extraordinary income gains of investment bankers, traders, and hedge-fund managers over the past two decades skewed the city’s economy in some unhealthy ways. ... Stratospheric real-estate prices have made New York less diverse over time, and arguably less stimulating. When I asked Jacobs some years ago, about the effects of escalating real-estate prices on creativity, she told me, ‘When a place gets boring, even the rich people leave.’”

A creative population is a stimulus all its own.

Jonathan Mark's piece is posted on the Jewish Week website as news, not opinion.

Here is a screen shot showing that. Please click to enlarge: 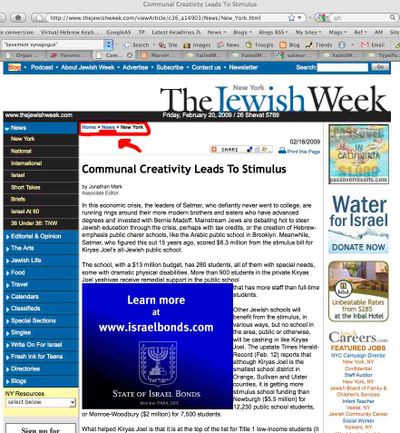 No critic of Satmar is quoted. No contradictory evidence is cited. No expert in Jewish communal service or community politics is quoted.

Kiryas Joel votes in a bloc. Does that effect the amount of money it gets from state and federal programs? You bet it does. Is it ethical? No, it is not.

Kiryas Joel is rife with illegal housing practices that keep non-Jews (and non-hasidim) out of the village. Does this effect the amount of money Kiryas Joel gets from government? Of course it does. It's a large part of why bloc voting works.

Where is Satmar's money, Mark asks?

Some of it is hidden. Hasidim with several Social Security numbers may look poor, but they aren't.

Schools that inflate their student census to get more federal hot lunch money have money that doesn't show on the books, and that off the books money is multiplied exponentially if the school doesn't really have a hot lunch program to begin with.

Satmar businessmen who keep several sets of books or loot their companies of assets (think Allou Healthcare, for example) have significant amounts of money – and that money does not show on tax returns and in census data.

But the real answer to Mark's astounding question is that the organization of Satmar is different than the people of Satmar, and non-liquid assests like propertyheld by institutions do not necessarily impact the economic level of the population level those institutions serve. (The Catholic Church is a good example of this.)

Even as an opinion piece, what Mark wrote is sloppy, disingenuous and unethical, and should not carry the byline of a member of a paper's editorial staff.

But what Mark wrote is filed and posted as news.

There is something terribly wrong at the Jewish Week.