Head Of Busted Satmar Drug Ring May Be Unfit For Trial

Hasidic 'drug smuggler' may be unfit for trial
By Yuval Goren, Ha'aretz.com 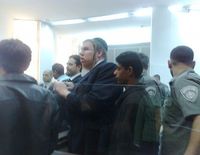 The principal suspect in a case involving alleged drug smuggling by Satmar Hasidim has been sent for psychiatric evaluation and may be declared unfit to stand trial.

The suspect, Ben Zion Miller, is accused of smuggling 90,000 Ecstasy pills from Holland to Japan. The Tel Aviv District Court ordered the evaluation in response to an appeal against his detention in which his attorney, Yair Nehorai, argued that he suffered from manic depression and might be unfit to stand trial.

Miller and Yisrael Eisenbach, both Satmar Hasidim from Jerusalem, were arrested early last week by the Tel Aviv police on suspicion of involvement in a drug-smuggling ring uncovered last April when Japanese police arrested three Satmar Hasidim at an airport in Shiba, Japan and found 90,000 Ecstasy pills in their suitcases. That prompted an international investigation involving Interpol as well as national police forces, that ultimately resulted in the arrest of Miller and Eisenbach. The latter was released one day after being arrested, but Miller remained in detention, prompting Nehorai to appeal.

In his appeal, Nehorai said that Miller was on regular medication to treat his manic depression, and the state had even declared him partially disabled on account of this illness. Therefore, he argued, Miller might be unfit to stand trial, and if so, there was no justification for continuing to hold him in detention - not to mention the fact that the state would be wasting its time and money by pursuing the case against him.

Moreover, Nehorai argued, Miller's family was very concerned that the pressures of being interrogated by the police and the poor conditions in the lock-up would cause his fragile mental condition to deteriorate, provoking a bout of full-fledged depression.

The court agreed that Miller should be sent for psychiatric evaluation in the next few days. However, it decided, he should remain in detention until the results of the evaluation are received.

Posted at 04:36 AM in Crime, Litigation, etc., Haredim, Israel | Permalink

Head Of Busted Satmar Drug Ring May Be Unfit For Trial