Guest Post: Why Do People Believe The Torah Was Given By God? Isn't That Belief Unreasonable?

Solomon Schimmel, Ph.D, says it is: 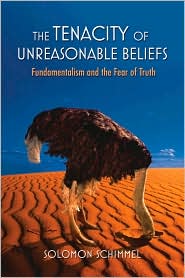 Having read my recently published book, The Tenacity of Unreasonable Beliefs: Fundamentalism and the Fear of Truth (Oxford University Press, 2008) Shmarya has invited me to write a guest post on FailedMessiah.com about the book. Shmarya suggested the two questions below for me to discuss, but I will go a little beyond that in this posting.

1. Why is the belief that the Torah (Pentateuch) was revealed by God to Moses at Mt. Sinai (TMS) an unreasonable belief?

2. Why do people maintain this unreasonable belief, in the face of overwhelming evidence that it cannot be true?

My book only briefly addresses the first question, because one hundred and fifty years of biblical scholarship, comparative religion, archaeology, linguistics, biology, cosmology,  and philosophy has proven beyond a reasonable doubt that the TMS proposition cannot be true. There was no need for me to restate and affirm that which has been demonstrated by the researches and analyses of thousands of scholars across a range of academic and scientific disciplines. In my book I suggest several works that summarize the evidence against TMS in favor of the alternative hypothesis, that the Pentateuch is an edited product of Multiple-Source Post-Mosaic materials (MSPM). A good start would be two recent books, James Kugel’s How to Read the Bible: A Guide to Scripture, Then and Now (The Free Press, 2007) and Michael Coogan’s The Old Testament: A Historical and Literary Introduction to the Hebrew Scriptures (Oxford University Press, 2006).

For me, the much more important tasks that I set for myself in my book, were to understand why and how otherwise intelligent and educated people – in particular  orthodox Jews, modern as well as haredi, (as well as their analogues among Christians and Muslims) cling so tenaciously to the belief in TMS (and analogously for Christians, the belief in the historicity of a physical resurrection of Jesus, and for Muslims, the belief in the historicity of the revelation of the Koran directly from Allah to an angel Gabriel, and from him, to Muhammad). These beliefs, and what follows from them, include, at least for most hareidim, such as the late Lubavitcher Rebbe (who had a secular education) that the world is less than 6,000 years old, and hence the denial of evolution, and denial of the findings of modern astrophysics and cosmology as to the origins and age of the universe and the solar system. These TMS based beliefs are of course absurd in the face of contemporary science.

Although most, but not all of the modern orthodox have for the most part accepted evolution, albeit of the “intelligent design” version, they have yet to face with intellectual honesty and integrity the challenges to their belief in TMS. Moreover, what also follows from belief in TMS is often a set of values and attitudes that are extremely difficult to reconcile with contemporary values that the modern orthodox would affirm, and hence they find themselves in a bind of cognitive dissonance which generates a convoluted and strained stream of apologetics. Most modern orthodox Jews would not be comfortable with slavery, or if they had the power and authority to do so, with putting a Sabbath violater to death, or doing the same to two men who engage in anal sex, or to Hindu polytheists. Yet to believe in TMS is to believe that in principle these behaviors deserve capital punishment as mandated by God. It would be much more honest and straightforward to affirm that these are man made laws which are now obsolete (not to imply that there was ever a time when they were morally justified). But such a “heresy” cannot be asserted, at least publicly, in many modern orthodox synagogues and communities, surely not from the pulpit, even by the most secularly educated, sophisticated, and morally sensitive Rabbi.

Another result of or at least correlate of belief in TMS, especially in the haredi world, but even among some modern orthodox, is intolerance of other religious (and non-religious) views, whether of other Jews or of non-Jews, and a sense of self-righteousness that comes from being certain that you know what God has willed for humankind.

Another negative consequence of the tenacious clinging to unreasonable beliefs and the teaching of TMS as truth in orthodox day schools, is that orthodox education is based on (to put it crudely and harshly) falsehoods and pillars of (irrational) sand, which many youth educated in the modern orthodox day schools will come to realize is the case shortly after they begin their college studies, if they haven’t already come to that realization while in high school.

In my book I analyze a variety of factors which have produced the present situation of clinging to false beliefs, such as love of tradition and of a traditional life style, family and community attachments, many positive moral and ethical values of orthodoxy, and the fear that jettisoning belief in TMS would result in existential despair, the loss of commitment to halakha, a breakdown of ethics and morality, and deep feelings of guilt at a sense of betrayal of ancestors who sacrificed so much to perpetuate tradition.

Another theme of my book is the strategies that believers in unreasonable beliefs use in order to defend themselves and their beliefs from rational and empirical challenges to them. One of these is avoidance or denial of the evidence and arguments – illustrated by the picture on the jacket of my book of an ostrich sticking its head in the sand when facing danger (whether or not that is actually true about ostriches is debatable, but the metaphor is true for many of the orthodox today (and let us not forget, for Christian and Muslim fundamentalists as well). Other strategies are selective attention to facts, selective interpretation of facts, and ad hominem arguments against scholars and scientists who challenge belief in TMS, or other core beliefs of fundamentalists.

I also briefly describe factors which play a role in inducing individuals to give up their religious beliefs, especially of a rigid, dogmatic, fundamentalist variety. This raises the question of the ethics, or lack of ethics, of what I refer to as attempts to “defundamentalize fundamentalists”. In other words, when is it appropriate and when is it inappropriate to try to wean a person from his or her religious beliefs and commitments. I am now working on the sequel to The Tenacity of Unreasonable Beliefs: Fundamentalism and the Fear of Truth, which will address in depth the question of When, Why, and How to Defundamentalize Fundamentalists.

I appreciate the opportunity that Shmarya has provided me to bring to your attention, albeit in the most summary fashion, some of the themes of my book – which has already garnered much attention in the world of modern (as well some of haredi) orthodoxy. I hope you will read it and I welcome your comments after you do so.

As much as I know an intact Torah just like the one we have today could not have been given at Mount Sinai, and as much as I know the evidence is overwhelmingly against Divine authorship of the Torah we have, something in me still rebels at the idea that belief in Torah Mi Sinai is unreasonable.

I may not exactly believe it – neither did Ibn Ezra and a couple other Rishonim and, I suspect, neither do many Modern Orthodox rabbis today. It would be better, I think, if we could view the Torah as myth, meaning that the stories may not have actually happened but the truths they mean to convey are real.

The main point as I see it is to never let your religious beliefs cause you to act violently or hatefully toward others, and never to let those religious beliefs get in the way of healing and scientific progress.

Guest Post: Why Do People Believe The Torah Was Given By God? Isn't That Belief Unreasonable?