Lock him in a cell with a 24/7 video screen playing pictures of his victims. 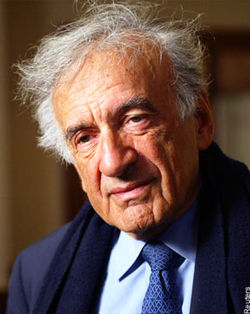 Nobel Peace Prize-winner Elie Wiesel ripped into Bernie Madoff this morning -- saying the financier who allegedly ripped off investors to the tune of $50 billion is a "psychopath."

"He should be put in a solitary cell with a screen, and on the screen, for at least five years of his life, [would be] pictures of his victims," said Wiesel.

Wiesel, 80, who survived the Holocaust and went on to become a novelist and political activist, lost $15.2 million of his charity's money, and much of his personal fortune, in Madoff's alleged Ponzi scheme.

The author tore into Madoff during an emotional panel discussion called "Madoff and The Meltdown" at the 21 Club in Midtown.

"Psychopath is too nice a word for him. The man knew what he was doing," said Wiesel.

He said he was duped into investing with Madoff when a wealthy friend introduced the two about a decade ago.

"He presented himself as a philanthropist. He gave so much money to institutions," Wiesel recalled.

Given Madoff's reputation, particularly among Jews, trust was not an issue.

"There was a myth he created around him. [His expertise] was so special, it had to be a secret," Wiesel said. "He gave the impression maybe 100 people were part of his club. Now we know there are thousands."

When Madoff's financial statements - now known to be false - showed the investments to be skyrocketing, Wiesel handed over the assets of his charity, the Elie Wiesel Foundation for Humanity.

"We thought we did so well. Everyone told us you can [make] so much more profit because of Mr. Madoff, the savior," he said.

Now that the money is gone, the institute is unable to open a center in Jerusalem, as previously planned.

But Wiesel said he is hopeful for the foundation's future, given all the sympathy he has gotten from people.

"You can't imagine the response," he said. "Hundreds of people sent us money through the Internet, saying, how could he have done this to you?

Lock him in a cell with a 24/7 video screen playing pictures of his victims.