This post is updated thanks to a tip from Yair, who noted the latest IDF video has a warning screen.

Here is that video:

Here's the warning screen you get before seeing the above video:

YouTube has dozens of uncensored videos posted by the Multinational Force in Iraq, many more graphic than the IDF video posted above.

The second post showed that the Multinational Force in Iraq also has a YouTube channel, and none of its videos, most as graphic as the IDF videos, had been removed or censored in any way – and there is no warning screen on those MNF Iraq videos.

I apologize for having to do this. But I have to make sure the truth is clear.

And here is a media mention of warning screens for IDF videos, this from Wednesday, December 31, 2008 at about 1:05 pm CST: 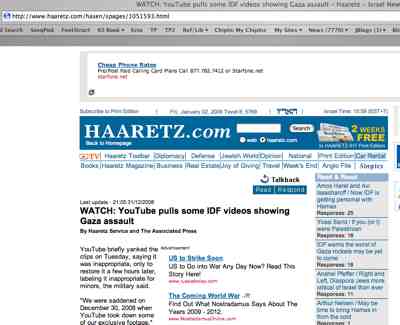 YouTube briefly yanked the clips on Tuesday, saying it was inappropriate, only to restore it a few hours later, labeling it inappropriate for minors, the military said.…

Here's another, from the AP: 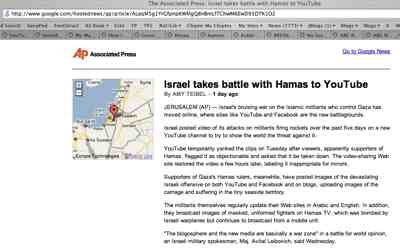 YouTube temporarily yanked the clips on Tuesday after viewers, apparently supporters of Hamas, flagged it as objectionable and asked that it be taken down. The video-sharing Web site restored the video a few hours later, labeling it inappropriate for minors.

Posted at 02:14 AM in Israel, Media & Media Criticism | Permalink