…marriage in the US. 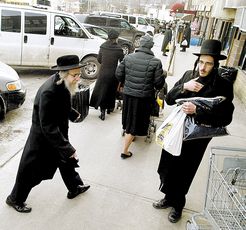 This is the future of American Jewry, the "hope" for our demographic survival. While Satmar is very good at making babies, it is very bad at providing those babies with skills and educations needed to earn enough money to support large families.

In other words, without massive amounts of charity, Kiryas Joel and communities like it– Borough Park, Williamsburg, Crown Heights, New Square and Monsey – are not sustainable.

KIRYAS JOEL — This village has always had the distinction of being a cultural and religious enclave, but now it can add another:

Kiryas Joel is the poorest place in the country.

According to the latest round of U.S. Census figures, released late last year, the village has the highest poverty rate in the nation, and the largest percentage of residents who receive food stamps. Only one other place in the 50 states has a lower median income. The median household income in Kiryas Joel is $15,848; in Carbondale, Ill., it's $15,799.

More than two-thirds of Kiryas Joel residents live below the federal poverty line and more than 40 percent receive food stamps, according to the American Community Survey, a U.S. Census Bureau study of every place in the country with 20,000 residents or more.

That makes the village poorer than crumbling big cities like Detroit and noted slums like East St. Louis, and by far the poorest place in the mid-Hudson.

The poverty rate in Newburgh, the next-poorest place, is 28 percent. Regionwide, it's about 11.5 percent. Places in the country with poverty rates similar to Kiryas Joel are mostly college towns with large populations of students who don't have full-time jobs.

Village officials did not return calls seeking comment, but an expert in Hasidic communities said the poverty figures are tied strongly to the village's religious culture and mores.

Pressure to have many children and the demand to send them to expensive private schools, combined with a low number of people who go to college or leave the village to get higher-paying jobs, produces a static and poor society, said Samuel Heilman, professor of Jewish studies at Queens College.

"This is a population that sees childbirth as a sign of high status and for women a fulfillment of their divine and socially sanctioned role in life," Heilman said. "They are also an insular community that see life on the inside superior to the outside."

The tendency toward large families is borne out in the American Community Survey data.

Also, the village has the highest marriage rate in the country, with 80 percent of women ages 15 to 50 being married.

Poorest places in the country and local results