« Did The OU Engineer An Agriprocessors Coverup? It Seems So… | Main | BREAKING! Bomb Found At Chabad House In Italy – Lessons Of Mumbai Not Learned »

I have two words to say about this groundbreaking research:

Prof. Eugene Kobyliansky keeps two busts in his office. One represents the face of an average male Jew in ancient Israel from 332 to 37 B.C.E; the other is a composite face for Jewish women from the ancient Roman era (37 B.C.E. to 324 C.E.). 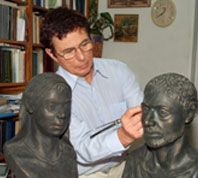 "It's like looking into a time machine, going back 2,000 years, to visit these people," says Kobyliansky.

Kobyliansky, of the Sackler Faculty of Medicine at Tel Aviv University, is the first researcher in the world to provide facial reconstructions of what Jews looked like in the land of Israel, before their exile into the Diaspora.

Using bone measurements collected from skulls at Jewish burial sites at Ein Gedi near the Dead Sea and the Jordan River, Kobyliansky created plastic molds on which to base the facial reconstructions. The technique was made possible through a unique forensics lab in Moscow, at the Institute of Ethnology and Anthropology of the Russian Academy of Sciences, which uses the most up-to-date software in anthropological facial reconstruction to recreate facial features from craniums with about 70 percent accuracy.

The skulls of a male from the Hellenistic period and a female from the Roman period were reconstructed. Based on its facial reconstruction, the male skull might have belonged to the large Mediterranean group that inhabited the area from historic to modern times. The female skull also exhibits all the Mediterranean features but, in addition, there are probably some African traits, as manifested by the shape of the nose and face.

"This woman certainly had some African intermixture," Kobyliansky explains. "We know from history and the stories of King Solomon that there were Ethiopian Jews in Israel. In this particular female, we see some African traits. But maybe she was absolutely white in color. It's impossible to say."

One problem that has always plagued students of Jewish physiognomy has been the lack of representation. While Egyptians, Romans and other peoples in the near Middle East region were well represented in art through painting and sculpture, Jewish custom, like that of Islam, dictated that human beings -- especially holy figures -- not be represented in form or image.

Says Kobyliansky: "Jews didn't create sculptures of themselves or paint pictures of an ideal. It was forbidden to do so."

Another obstacle to anthropological studies of ancient physiognomy has been strict reverence for Jewish burial customs. Jewish law prevents the exhumation of Jewish bones, except under extreme circumstances. In Kobyliansky's case, he created his plastic molds from cranial remains collected over several decades.

Kobyliansky, who is also director of the Lilian and Marcel Pollak Chair in Biological Anthropology at TAU, compared his composite molds of 2,000-year-old skulls to skulls from 17th-century Jews from Prague to confirm his findings.

The first study of its kind in the world, Kobyliansky's research was published recently in German journal Anthropol Anz.

All kidding aside, it is not surprising the woman seems to have some African features.

Jewish mercenaries from Israel were based in Egypt, a large Jewish community lived in Egypt, and Egypt's Upper or Southern Kingdom extended into modern day Sudan.

Those Egyptian Jews had frequent contact with the land of Israel and there was cross pollination between the two communities.

Most converts in situations like this are female servants or slaves converted and then married by male Jews.

And this is backed up by genetic research, as well.

What science is showing is that today's haredi understanding of conversion is, to put it mildly, not how Jews viewed conversion throughout most of history.

It is also showing we as a people descend from many inter-ethnic couples – just like Barack Obama.

Posted at 03:39 AM in History, Israel, Science | Permalink

I have two words to say about this groundbreaking research: