As we correctly reported last night, Yegutkin also worked for Oorah's Camp BoyZone during the summer:

Two teenage boys told cops they endured years of sexual abuse at the hands of a Brooklyn high school principal who was arrested over the weekend, police said. 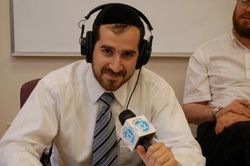 Yegutkin forced a 17-year-old into lewd sex acts from the age of 7 to 14, cops said.

He subjected a 19-year-old to five years of fondling, beginning when the teen was 12, police said.

"This has nothing to do with the school," said Elite High School Headmaster Tzvi Koff. "But we have to protect our students. He no longer has access to the school building and he is not part of our institution anymore."

The disgraced educator - who also worked in upstate Gilboa as a lifeguard at Oorah summer camp last year - was charged with endangering the welfare of a child and sexually abusing children for more than a four-month period, according to a spokesman for the Brooklyn district attorney's office.

A message left at Yegutkin's Ocean Parkway home was not returned.

"We investigated him before we hired him and never had a complaint," Lewenstein said.

"If anybody in Hatzoloh is accused of any criminal issue, we suspend them until the issue is cleared up," Hatzoloh spokesman Heshey Jacob said.

Yegutkin "suspended himself" when he was contacted yesterday, Jacob said.

Yegutkin's arrest is the latest blow to Brooklyn's Orthodox Jewish community. Since October, at least four Orthodox Jewish men in the borough have been charged with sexually abusing children.

We are shocked and saddened by the unfortunate news about Emanuel Yegutkin, who was an employee of Oorah’s Boy Zone for the past two summers.

During the time that Mr. Yegutkin worked at Boy Zone we received no reports of improper behavior or anything that would have raised even the slightest concern. We have not been informed by law enforcement officers of specific details or heard of allegations of any incidents in Boy Zone.

However, we take this matter extremely seriously and have offered our full cooperation to the authorities in their investigation of this matter.

We wish to reiterate our zero tolerance policy with respect to behavior that may endanger children.  Our first concern is, and always be, the safety of the children entrusted to our care.

Update 1:50 pm – Here is another statement from Oorah, nearly identical to the one above, issued this morning and sent via email:

Lakewood, NJ, January 26, 2009-- Following is a statement issued by Elisha Lewenstein, camp director of Oorah, Inc., regarding news about one of its former volunteers:

"We are shocked and saddened to hear about the allegations involving Mr.
Emanuel Yegutkin, who was one of 400 volunteer staffers at our Upstate New
York camp. Our primary concern has always been, and remains, the safety and
well being of the children entrusted to our care.

"Oorah has a zero tolerance policy when it comes to any improper or illegal
behavior by staff. That is the way we have run our camp since it opened
and that is the policy we will continue to abide by in the future.

"None of our children ever complained about the conduct of Mr. Yegutkin and
we have no reason to believe that Mr. Yegutkin did anything improper while
at our camp. Obviously, we hope that this remains to be the case through the
course of the police investigation.

"We will continue to fully cooperate with law enforcement officials in their investigation.

"Since this is an ongoing investigation, we will reserve further comment
until more facts about this case become available from law enforcement
officials.

As we correctly reported last night, Yegutkin also worked for Oorah's Camp BoyZone during the summer: