« Mondrowitz Case On Zev Brenner Tonight Monday Night | Main | Maimonides The Muslim? Could What We Call Jewish Law Have A Muslim Source? »

…(and also here and here), it has great bits of information like this:

…[Michelle] Malkin became something of a cause célèbre among YouTube critics in 2006, when she created a two-minute movie called “First, They Came” in the wake of the violent response to the Danish anti-Muhammad cartoons. After showing pictures of the victims of jihadist violence (like the Dutch filmmaker Theo Van Gogh) and signs declaring “Behead Those Who Insult Islam,” the video asks, “Who’s next?” and displays the dates of terrorist attacks in America, London, Madrid and Bali.

Nearly seven months after she posted the video, Malkin told me she was “flabbergasted” to receive an e-mail message from YouTube saying the video had been removed for its “inappropriate content.” When Malkin asked why the video was removed, she received no response, and when she posted a video appealing to YouTube to reinstate it, that video, too, was deleted with what she calls the “false claim” that it had been removed at her request. Malkin remains dissatisfied with YouTube’s response. “I’m completely flummoxed about what their standards are,” she said. “The standards need to be clear, they need to be consistent and they need to be more responsive.”

I watched the “First, They Came” video, which struck me as powerful political commentary that contains neither hate speech nor graphic violence, and I asked why it was taken down. According to a YouTube spokesman, the takedown was a routine one that hadn’t been reviewed by higher-ups. The spokesman said he couldn’t comment on particular cases, but he forwarded a link to Malkin’s current YouTube channel, noting that it contains 55 anti-jihadist videos similar to “First, They Came,” none of which have been taken down. (“First, They Came” can now be found on Malkin’s YouTube channel, too.)…

Malkin claims other videos she made are still being censored by YouTube. (Please see below for details.) She also notes the specific video Rosen mentions was banned until Rosen spoke to YouTube about it..

Google claims the takedown was "routine," which I'm sure it was. As I noted, Google routinely censors content its employees do not like, and it does so in exactly the same way it did to Malkin – without explanation or recourse.

Here's the video Google banned and then, as Malkin shows below the video, reinstated more than one year later after Jeffery Rosen asked Google about it.

I went to Malkin's blog to see what she had to say about Rosen's piece.

First of, she said this:

Several weeks ago, I spoke with GWU law professor Jeffrey Rosen about my curious experiences with YouTube’s mystery censors. Longtime readers will remember the battle over “First, They Came.” For the past two years, my attempts to re-upload the little video about the Mohammed Cartoons and violent jihad were blocked. Other users were able to upload it, but it was blocked from my personal channel. Lo and behold, after Rosen inquired about it, the video is now available again. 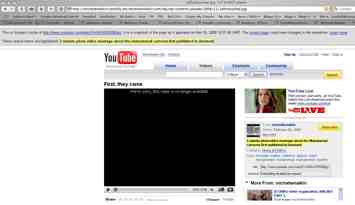 This is the same type of thing Google did to me when it banned this site and then every other site I have, no matter how uncontroversial, from AdSense. Google said in writing the ban only applied to FailedMessiah.com and would not apply to other sites I have. It then went on to immediately ban those other sites – a health site not in any way connected to Judaism or to anything controversial and Jewish site that posts Jewish legal decisions and translations of them, along with translations of sections of the Shulchan Aruch.

Neither of these sites can in any way be construed as violations of Google's policies or terms of service. But that did not stop Google's censors from banning them.

How does Google make these decisions? Jeffrey Rosen explains:

The most powerful and protean of these Internet gatekeepers is, of course, Google. With control of 63 percent of the world’s Internet searches, as well as ownership of YouTube, Google has enormous influence over who can find an audience on the Web around the world. As an acknowledgment of its power, Google has given Nicole Wong a central role in the company’s decision-making process about what controversial user-generated content goes down or stays up on YouTube and other applications owned by Google, including Blogger, the blog site; Picasa, the photo-sharing site; and Orkut, the social networking site. Wong and her colleagues also oversee Google’s search engine: they decide what controversial material does and doesn’t appear on the local search engines that Google maintains in many countries in the world, as well as on Google.com. As a result, Wong and her colleagues arguably have more influence over the contours of online expression than anyone else on the planet.…

Voluntary self-regulation means that, for the foreseeable future, Wong and her colleagues will continue to exercise extraordinary power over global speech online. Which raises a perennial but increasingly urgent question: Can we trust a corporation to be good — even a corporation whose informal motto is “Don’t be evil”?

Google has proven that it cannot be trusted.

If WordPress – open source, free and completely uncensored –did not exist, Google would have life or death control over most blogs. And that would have a chilling effect on free speech.

(If your blog is currently using Blogger, consider switching to WordPress. It's easy to do, and you'll be making a small contribution to the cause by doing so.)

Malkin also notes that other videos she has made which are similar to the above video are still banned by Google – presumably because Rosen did not ask about them.

How are they banned?

Google, she says, is falsely claiming the videos were removed at Malkin's request:

The salmon colored strip contains text which reads, "This video has been removed by the user." Malkin says that is false.

So? How should Google be dealt with?

I think the answer is threefold:

One, out Google and its subsidiaries at every turn. Do so loudly and in as many different forums as possible. Make Google's name synonymous with censorship – which will make consumer trust in Google drop, and with that drop will come a commensurate drop in Google's stock value.

Two, if you have a blog hosted by Blogger or using Blogger software, move it to WordPress. (Or this version of WordPress if you want to run ads on your blog.)

Three, sue. Malkin should have sued Google. I should have, also. We both have time to rectify this mistake. I, for one, am doing so.

Posted at 08:02 AM in Israel, Media & Media Criticism | Permalink