« Madoff "Loved" Pork Sausage, Stayed at London Hotel Costing More Than $10,000 Per Night – "Everything Had To Be Square" | Main | Rubashkin And The Law Of Return, Cont.– The JTA Gets It (Somewhat) Wrong Again » 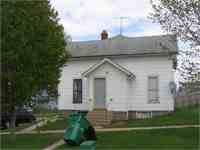 When 150 Palauan workers were brought to Postville late this summer, most were housed by GAL Investments. But GAL did not have enough properties to house all of the Palauans.

So Agriprocessors put a few of the Palauans in Nevel properties but GAL manage them. One of those properties is 129 South Maple.

This morning, the occupants of 129 South maple were evicted.

Gabay Menachem of GAL Investments tells me he did not ask for that eviction. He pointed out the property is now being managed by Trevor Siebert.

Siebert told me he did not ask for the eviction either. I asked him if anyone at Nevel Properties or the banks could have ordered it. All he would say is, "I did not order it and no one working for me ordered it."

Assuming both Menachem and Siebert are telling the truth, only Nevel Properties could have ordered the eviction.

Charles "Chuck" Kelley, who name is written at the top right of the eviction order, is both Nevel's and GAL's attorney.

I called him last night and asked him if he ordered this eviction. He declined comment. He also declined to comment when I asked if Nevel or the banks had ordered it, saying he was not able to comment on actions his clients may or may not have taken.

Siebert described these tenants as deadbeats who had not paid any rent, even though all are working. He also told me he would not call off the eviction unless they paid.

Palauans have repeatedly claimed they were promised free housing as part of a package that brought them from the Pacific island of Palau to Agriprocessors in Postville. Instead of free housing, Palauans got substandard housing at inflated rents and were paid less per hour by Agriprocessors than promised.

Siebert was quick to add there are no other evictions are scheduled until after next Tuesday's meeting with state, county and city officials. The meeting is meant to explain to landlords why the government promised them market rents for their properties and then after the fact cut that rent by one third.

The mortgage payment on this property can't be more than $350 per month. With insurance, the cost would be less than $450 per month – in other words, the basic cost to keep the property occupied is just about what the government is willing to pay for it. Unlike other properties purchased more recently or that are newer or larger, this property fits well with the government's revised program.

Even if the tenants are deadbeats, why evict when government payments will more than cover the mortgage, insurance and even management fees.

So, who asked for this eviction?

Based in part on my previous conversations with Gabay Menachem and Trevor Siebert, I think Nevel – meaning its attorney, Chuck Kelly – asked for the eviction and did so on urging of the banks and the recommendation of Siebert.

I think the reason is the banks do not trust the government. The government unilaterally changed the rental assistance program after the fact. That hurt landlords – which means the banks were hurt.

In the eyes of the banks, who's to say the government won't change the program again and take away more money from them?

Until the government can find a way to assure the banks that won't happen, the banks will not agree to participation in the rental assistance program.

What does that mean?

If renters don't come to GAL and Siebert with money and work out payment plans, it means wholesale evictions will begin late next week or early the week after.

And that $698,000 grant the State of Iowa touted? The grant that was meant to stop evictions and stabilize Postville?

It will go largely unused.

Based on the actions of Iowa's Department of Economic Development, perhaps that's what Iowa's governor wanted, anyway.