The potential buyer is…

…Soglowek Naknik Nahariya Kosherl Ltd. (Please see below for company details and a translation of its name.)

There is no court-approved deal yet.

But Soglowek (also transliterated as Zoglobek), an Israeli food company is seriously looking at Agriprocessors, a well-placed source told me last week, and appears to have set up a contract run of Agriprocessors product.

This Israeli company has allegedly allowed Agriprocessors to purchase cattle in its name (Agriprocessors can't purchase in its own name until millions of dollars it owes to cattle finishers and dealers is paid), and has allegedly provided Agriprocessors with other, smaller financial help – like putting its cattle buyers cell phones in the potential buyer's name, a source, an area businessperson, told me.

And the Israeli haredi newspaper Sha'ah Tova is reporting that Soglowek is indeed interested in buying Agriprocessors – but at very a very distressed price.

This is a legitimate company.

The name translated into English is Soglowek Kosher Sausage Company of Nahariya. Soglowek is the family name of of the founders, Jews who fled Germany just before the Holocaust (although, from the name I would think the family was from Poland and moved to Germany, probably about the 1895). Nahariya is a city in Israel.

However, it it is still possible there is a Rubashkin hand behind this potential deal.

That is something the US Attorney's office should look at carefully. I do not think the bankruptcy trustee has the wherewithal or the motivation to do it, and neither does US Bankruptcy Court.

But if Soglowek is free from Rubashkin ties, this could be a very good deal for Postville.

Zoglobek had its own share of controversy when it was discovered in year 2000 that one of its Jewish plant managers Chanon Zoglobek, was pressuring the workers to become adherents of Scientology, a cult "religion" that has been discredited in dozens of countries.

I did some quick hunting and found the sources of that report are the Israeli anti-missionary organization Yad L'achim and Yated Ne'eman.

Here's the entire report as a PDF:

VIN's source for the potential sale is the haredi Israeli newspaper mentioned above, Sha'ah Tova.

2. Eli Soglowek (also spelled Zoglobek), who shows up in VIN's report as a company director and owner, is listed elsewhere as a principal of Foodtech International, which seems to do business as Veggie Patch, a wholesaler of food based in Virginia.

Both companies share the same address, and clicking on the FoodTech link on Zoglobek's page takes one directly to Veggie Patch.

Veggie Patch is reported to have annual sales of $10 million to $25 million with 50 to 100 employees. 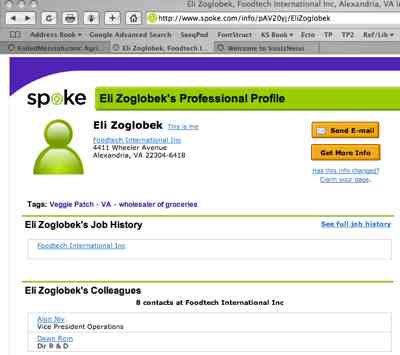 …Under the ”ZOGLO’S” brand, the company exports its vegetarian
products and other selected products via representatives in 15 countries worldwide, including Canada, U.S.A, Australia, and many countries in Europe.…

Soglowek's products are distributed in the US by Blue & White Foods (Sabra Salads) and in Canada and parts of the US by Foodfest International.

The company also has an international website aimed at consumers.

The potential buyer is…