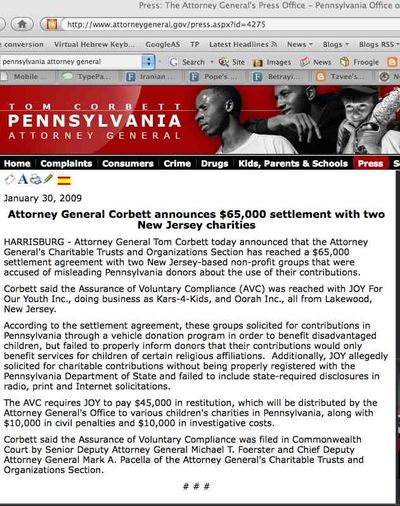 HARRISBURG - Attorney General Tom Corbett today announced that the Attorney General's Charitable Trusts and Organizations Section has reached a $65,000 settlement agreement with two New Jersey-based non-profit groups that were accused of misleading Pennsylvania donors about the use of their contributions.

Corbett said the Assurance of Voluntary Compliance (AVC) was reached with JOY For Our Youth Inc., doing business as Kars-4-Kids, and Oorah Inc., all from Lakewood, New Jersey.

According to the settlement agreement, these groups solicited for contributions in Pennsylvania through a vehicle donation program in order to benefit disadvantaged children, but failed to properly inform donors that their contributions would only benefit services for children of certain religious affiliations.  Additionally, JOY allegedly solicited for charitable contributions without being properly registered with the Pennsylvania Department of State and failed to include state-required disclosures in radio, print and Internet solicitations.

The AVC requires JOY to pay $45,000 in restitution, which will be distributed by the Attorney General's Office to various children's charities in Pennsylvania, along with $10,000 in civil penalties and $10,000 in investigative costs.

The scam, in case you missed it, is that Oorah presents itself to donors as a non-sectarian charity when, in fact, it serves only a small segment of the Jewish community, and raises money to convert non-haredi children to haredism.