BREAKING! Bomb Found At Chabad House In Italy – Lessons Of Mumbai Not Learned 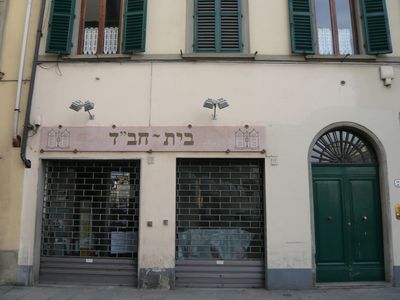 FLORENCE (JTA) -- A rudimentary explosive device was found at the entrance of the Chabad House in Florence. 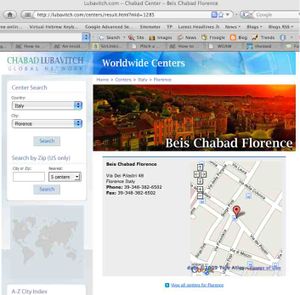 The device, described as being constructed from a small camping gas canister, was reportedly discovered during the day Saturday but not reported to police until Saturday night after Shabbat.

The Chabad House is located half a block from the city's main synagogue.

Media reports said a paper fuse apparently had been lit, but had burned out, and no damage occurred.

Florence Chief Rabbi Joseph Levy said the episode was "a very serious gesture that shows how one can pass from irresponsible words to actions such as this."

Tensions are high in Italy over Israel's operation in Gaza.  Last week, red paint was thrown at the façade of the synagogue in Pisa. On Saturday, thousands of people, many of them Muslim, staged a pro-Palestinian march in Rome. Some of the placards showed swastikas superimposed on the Star of David. 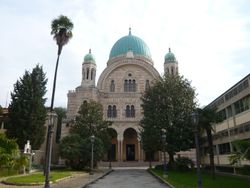 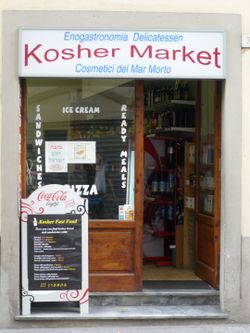 Chabad has done what with the lessons of Mumbai?

I was in Florence in early November, returning home a few days before the Mumbai horror.

The Chabad House in Florence is a storefront on a public street. Absolutely no security. Yes, it was pre-Mumbai, but no security whatsoever.

Contrast that to the nearby synagogue- one of the most beautiful and amazing synagogues I've ever seen- it is surrounded by a huge iron fence, with a big buffer zone to the building. Entering requires you to leave ALL your belongings in a locker room by the gate of the iron fence (you get a locker and key) and then you wait in an enclosed thick glass booth as your body is closely examined for several minutes via metal detector. Only after two security people closely examine you through the booth and question you are you allowed in. The thick glass booth has powerful doors to enter it and then to exit onto the synagogue grounds. There is no other way to enter, other than scaling the iron fence, which is about 12-15 ft. high. 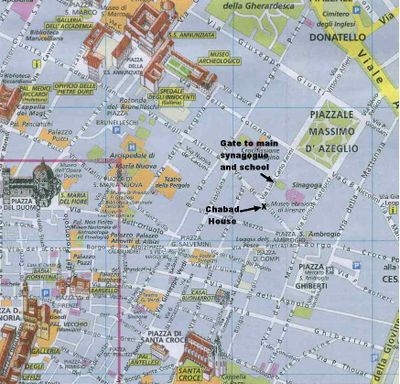 This is part of Chabad's business model. Work on the cheap. Don't pay for security or many of the other things necessary to run a safe, legal operation. Rely on the "Rebbe's bracha" to protect them and any of us who visit them.

At the same time, criticize the existing Jewish community for not doing enough free programming and outreach while stealing as many of its big donors as possible.

That business model should be about finished, I'd hope.

Photos: Top: Chabad of Florence; Middle: Main Synagogue of Florence (photo taken from outside the iron fence looking in with camera held between the fence posts); Bottom: A kosher store near Chabad House. All credit: WoolSilkCotton.

Graphics: Top: Chabad of Florence as it appears on Lubavitch.com; Bottom: Map of Florence (sent in by WoolSilkCotton) with the main synagogue and Chabad House clearly marked by me.

BREAKING! Bomb Found At Chabad House In Italy – Lessons Of Mumbai Not Learned