« Haredi Girl Gets Donated Heart – Father Says,"It's easy for us to receive organs, but we would never donate" | Main | Rubashkin Free – The Photo »

Ten days ago, we reported  that a bomb had been placed at Chabad of Florence, Italy on Shabbat and no one called police until after Shabbat ended.

Now Italian media is reporting the bomb – originally thought to be Middle East-related – is the outgrowth of an internal Jewish community dispute.

Chabad's behavior in Florence, which is seen by much of the local Jewish community as predatory and boorish: 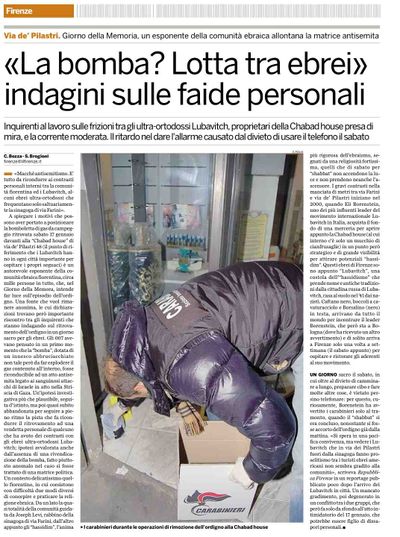 “A bomb? Something between Jews” – investigations on personal feuds.

The police are working on disputes between the ultra-orthodox Lubavitch, owners of the Chabad House hit Saturday, and the moderate Jews. Help was not called for immediately because of the Shabbat rule against telephoning.

“It’s no anti-Semitism, it’s all about personal feuds between the Florence Jewish community and the Lubavitch, a few ultra-orthodox Jews attending the Synagogue in Via Farini only sporadically.”

An authoritative member of the 1000-person Florence Jewish community explains the motives behind the finding of a small camping gas bottle Saturday January the 17th  in front of the ‘Chabad House’ in via de’ Pilastri 48 (the place the Lubavitch have in every important city to host their followers). It is the Holocaust Remembrance Day and he wants to shed light on the episode. An anonymous source, whose words are nonetheless in agreement with the detectives working on the case about the bomb found during a Jewish sacred day. At first the sleuths had thought about an anti-Semitic act in relation with the bloody Israeli military operations in the Gaza Strip. The ‘bomb’ had a rudimental fuse, unable to let the gas explode. The hypothesis was plausible, almost obvious, but was soon abandoned to follow clues about a personal vendetta. A vendetta unleashed by somebody who had disputes with the ultra-orthodox Lubavitch. No one claimed to be the author of the action, something odd if there had been political motives.

The Florence Jewish environment is extremely fragile: two ways to think about and practice Judaism coexist. From one side almost all of the community, led by Joseph Levi, the rabbi of Synagogue in via Farini. From another side, the ‘Hassidim’, the most rigorous Jewish denomination: during the Shabbat they do not turn the lights on and they do not use the lift.

In 2000 Eli Borenstein, one of the most influential leaders of the Italian Lubavitch, bought an old shop to open the Chabad house (inside there is only some old stuff). The location is strategic to attract potential new ‘Hassidim’. Problems in the few yards between Via Farini and via de’ Pilastri soon arose. These Florence Jews are called ‘Lubavitch’ or ‘Lubavitcher’, a branch of Hassidism, borrowing their name and their ancient traditions from the old Russian town of Lubavitch, destroyed by the Nazis in 1941. Black coat, payot, and black hat: they come from all over the world to meet their leader Borenstein, who, however, lives in

Bologna (where he received another ‘warning’) and goes to Florence only once a week (on Saturdays, that is) to host and cater for his followers.

The Shabbat is a sacred day when it’s prescribed not to walk for long, not to prepare food, and not to do many other things. There is even a rule about not using the telephone: it’s because of this that, curiously, Borenstein warned the Police only after dark, when Shabbat was over, even if he had seen the ‘bomb’ already during the morning. “We hope to live together peacefully, but to see the Lubavitch proselytize with the Jewish American tourists in front of the Synagogue doesn’t seem to be very good for the community”: this was reported in the Florence edition of La Repubblica soon after the arrival of the Lubavitch in town. A dislike that soon degenerated into a conflict between the two groups: this however is only the background of the intimidation act of Jan. the 17th. It could have been the result of personal motives.

Let me just clarify one thing. The main synagogue and its rabbi are Orthodox, and follow the ancient Italian nusach (rite) that dates back to before the destruction of the Second Temple.

So the conflict is not between non-Orthodox Jews and Chabad. The conflict is between an ancient Jewish community (with a longer and more historic pedigree than Chabad) and Chabad newcomers who behave in ways that upset the local community.

Chabad also competes for charitable donations with the Florence Jewish community, and is seen as poaching off it.

Pictures of the main synagogue, Chabad House, and a map of the area.