…it looks that way.

As you read this NY Daily News report, realize there was no way on visual inspection alone to determine exact cause of death, let alone who actually killed the hostages, terrorists or Indian commandos, or if victims had been tortured.

Let me also point out that what we have below is part of a pissing match between ZAKA and the Indian police, army and government.

ZAKA made allegations of a clear Indian role in the hostages' deaths. The Indians are pissing back.

As I wrote yesterday, the actual facts are important – not to lay blame but to prevent future deaths. 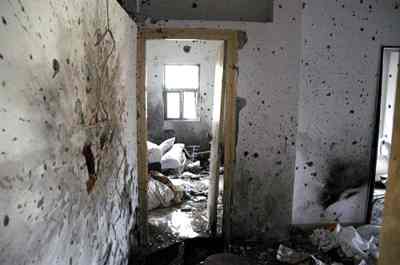 The Jews who were murdered in Mumbai were tortured before they were killed, the city's top cop said Thursday.

Several of the victims found in the Chabad House appeared to have died of "strangulation and not from bomb or bullet injuries," said Rakesh Maria, the police commissioner.

"There are indications that they were indeed tortured, although we are yet to receive medical reports."

Rabbi Gavriel Holtzberg, 29, and his wife, Rivkah, 28, both formerly of Crown Heights, were among those slaughtered last week after Pakistan-based terrorists staged a 60-hour rampage through Mumbai that left nearly 200 dead.

Most of the bodies found in the Jewish center the Holtzbergs ran were badly damaged when Indian commandos staged a botched rescue. This complicated the grisly task of gathering all the remains for burial as required by Jewish law, Israeli sources said.

"If they were tortured, it would be hard to tell from looking at some of the bodies," one said.

The torture claim was yet another shock for the ultra-Orthodox Lubavitch community, to which the Holtzbergs belonged.

Also slain in the attack was another former New Yorker who belonged to a Satmar sect, Rabbi Leibish Teitelbaum, 37.

Maria's horrific revelations came after India got another scare when several shots were fired at New Delhi's main international airport.

"It was not a terrorist incident," said local police spokesman Rajan Bhagat. "No one was killed."

The Mumbai massacre ratcheted up tensions between India and its neighbor Pakistan, which is where Lashkar-e-Taiba - the terrorist group blamed for the assault - is based.

Secretary of State Rice wrested a promise from the Pakistanis that they would take "strong action" against the alleged culprits.

That wasn't good enough for India, which demanded that Pakistan turn over Lashkar-e-Taiba's top leaders.

Among the items found on the slain terrorists was a cell phone SIM card from New Jersey, Maria said. The card could have been stolen from an American anywhere.

The Jerusalem Post has an older, contradictory report that says no one was tortured:

A hospital doctor at Mumbai's JJ Hospital, which received the bodies of six Jewish and Israeli hostages from the Chabad House terrorist siege, has cast doubt on a report claiming that signs of torture were apparent on the bodies of the victims.

Dr. Gajanan Chawan, who saw the bodies, told The Jerusalem Post on Tuesday he did not believe the wounds he observed suggested the hostages had been tortured prior to their deaths.

Asked if he saw any evidence of torture on the bodies, Chawan replied, "No, I don't think so." He added that the majority of the wounds he could identify had been caused by firearms.

On Monday, a morgue employee at the JJ hospital who had also seen the bodies told the Post by telephone that the bodies of the Jewish victims had a higher number of gunshot wounds than the bodies of other victims.

"On the Jewish bodies, there were more injuries in numbers, they were firearms injuries," the morgue official said.

The bodies of the victims were flown to Israel on Monday after successful Israeli diplomatic efforts to prevent autopsies being performed on them in accordance with the religious sensitivities of some of the victims' families.

On November 30, an article was posted on the Rediff Indian news portal which cited an unnamed doctor from an unspecified hospital as claiming that torture marks were evident on the hostages' bodies.

"Of all the bodies, the Israeli victims bore the maximum torture marks. It was clear that they were killed on the 26th itself. It was obvious that they were tied up and tortured before they were killed. It was so bad that I do not want to go over the details even in my head again," the doctor was quoted as saying.

The report has since been widely circulated among news outlets and internet blogs.

At least 172 people are believed to have died over 60 hours during the multiple terror attacks on Mumbai last week.

Why Who Killed Who Matters.