…Baruch Lanner, the rabbi accused of abusing hundreds of boys and girls during his near-30 years in the OU's National Council of Synagogue Youth?

(A list of MO leaders associated with this event appears below.)

Lanner was eventually convicted of abusing two children, and the NCSY's own internal investigation, forced on it by irate parents and funders, found credible and often irrefutable evidence of dozens more.

The common cord that held all these abuse cases together through those 30 years was knowledge.

OU and NCSY leaders protected Lanner because they did what was in effect a cost benefit analysis.

Lanner did great kiruv, missionary outreach.. He was charismatic and dynamic. For every victim there many newly Orthodox recruits.

So Lanner stayed at NCSY. He was not reported to police. No provisions were made to protect the children in NCSY's care.

But victims went public. The OU responded by smearing them. After initial successes, including a rigged beit din, religious court, run by Yeshiva University's Rabbi Modechai Willig, the OU's attempts to smear victims failed. Lanner was arrested, tried and convicted. In the aftermath, a small number of Lanner's enablers were forced out of the OU.

Chief among those enablers was Rabbi Pinchas Stolper.

Stolper founded NCSY and went on to head the OU, serving as its executive VP for nearly 20 years. Stolper hired Baruch Lanner and considered Lanner his protégé.

Now, rather than creating an award to honor the courageous victims that stood up and put an end to Lanner's evil, NCSY has instituted the Rebbetzin Elaine and Rabbi Pinchas Stolper Service Award.

Here is a copy of the invitation's page that mentions the Stolper Award: 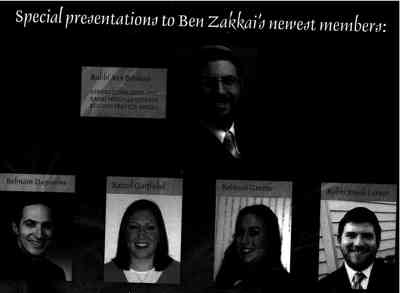 That's right – NCSY is giving its "service award" in the name of a man who stood by while dozens, perhaps hundreds, of children were abused.

Apparently, the message NCSY and the OU want students and their families to see is that following the code of silence, the omerta, brings you high honor. Being a 'snitch,' calling the police and putting an end to decades of rabbi-on-child sexual abuse? That brings no honor.

An OU insider involved in trying to remove Lanner's enablers told me two years ago that most of those who enabled Lanner still worked for the OU and NCSY.

Lanner, he pointed out, was himself never fired – he resigned on conviction as his enablers still scrambled to protect him.

You can even get a "service award" for enabling it.

UPDATE: I found a list of committee members and chairs for this event. A quick scan of the names turns up both BeyondBT's Steve Brizel (p. 8), disgraced former NY State Assemblyman Ryan Karben (p. 9), the RCA's executive director, Rabbi Basil Herring (p. 2), and the man who supposedly "reformed" the OU, Dr. Mandell I. Ganchrow (p .2).

And, sadly, so is Rabbi Yosef Blau, who is listed as a vice chair of the tribute committee (p. 2).

The OU's outgoing executive VP, Rabbi Dr. Tzvi Hersh Weinreb is also mentioned, but in an honorary capacity (p. 1). So are the OU's current president, Steven Savitsky (p. 1), Rabbi Dr. Norman Lamm (p. 1), and Richard Joel (of the Joel report linked below in the documents section of this post) (p. 1).

But NCSY and the OU is not stingy with these honors. In fact, it honored Rabbi Pinchas Stolper himself. He's listed as an honorary chair of the tribute committee (p. 1).

Here it is as a pdf:
NCSY Stolper Tribute Committee Chairs.pdf

And, Uncle Joe McCarthy sent in a link to a blog post on the 2005 dinner.

Who received the Solper Award that year? 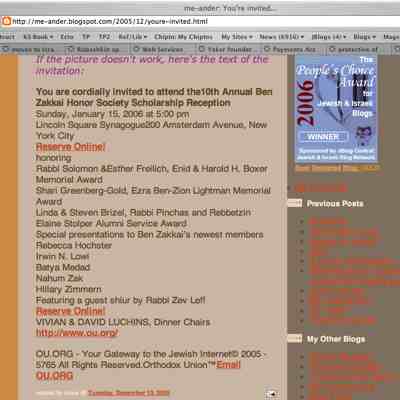 The Awareness Center: The Case of Rabbi Baruch Lanner.