Marvin Schick Gets It Wrong Again 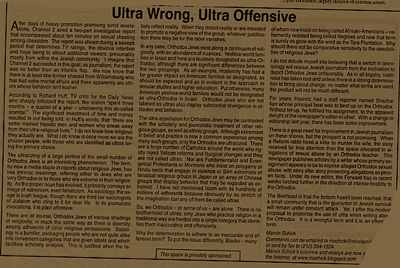 …anyone who dares point out the failings of his haredi community.

Schick likes to cloak this a bit by lumping Modern Orthodoxy together with haredism when that suits him. But the "attacks" against Orthodoxy Schick rails about are usually reports of haredi excess.

In the past, Schick has:

3. Blamed academics who write about the haredi community for things these academics never wrote.

4. Blamed the media for 'bias' against haredim.

5. Ignored his brother's crime (that brother sparked the Borough Park riots a couple years ago with his) and his nephew's crimes while writing about the ways law enforcement deals with haredim.

This week Schick lashes out at academics and media that use the term "Ultra-Orthodox."

Schick finds the term offensive and its use in academia "bush league" and the academics who use it "third tier."

Schick also claims the Jewish Week, "publishes articles by a writer whose primary assignment appears to be to expose alleged Orthodox sexual abuse, with story after story presenting allegations as proven facts."

These two hateful remarks seem to be directed at Hella Winston, even though Winston is careful to note in her book that some people find the term "Ultra-Orthodox" to be pejorative.

Schick, who is both a bully and a coward, has attacked Winston before. That he did so in the pages of the Jewish Week, and that he lied in order to 'prove' his point, has yet to answered for.

Further, Schick's entire article seems heavily based on a piece written by English writer Abbot Katz and published in the Forward. In part, Katz wrote:

…“Ultra” — the modifier of choice for a press hawking its smudged cartography of Jewish religious life — has enjoyed a long, wearisome, dubious run, and it isn’t recusing itself from the discourse any time soon. The Jewish religious world occupies a bewilderingly disparate space, to be sure, but mapping its turf begs a measure of precision of which the media’s collective instrumentation seems largely incapable — and “ultra,” with its Latinate tinge, redolent of cultic cadres pushing their faith to mysterious extremes, badly misreads the coordinates.…

After all, if there are ultra-Orthodox Jews, then there are merely Orthodox ones as well, and what makes the recourse to “ultra” so pernicious is its very status as prefix, a descriptive tack-on to a more primeval, integral Judaism of truer provenance. Orthodox Jews seem to be seen as marking the spiritual baseline, while the “ultras” are typed as a kind of fanatic insurgency, sparse but dangerous.…

Schick does not acknowledge Katz.

As for use of the term "Ultra-Orthodox," the media needs a way to distinguish between the people Marvin Schick shills for most of the time, and those he shills for only some of the time.

By the late 1970s, reporters needed a way to explain the difference between normative American Orthodoxy (i.e., Modern Orthodoxy and haredim, and it needed to do do that with a label, not a paragraph.

Haredim were only a tiny section of American Orthodoxy until post-war haredi children began having children of their own. When this happened, haredim began to gain prominence within Orthodoxy. By the time the grandchildren of haredi survivors had their own children, haredim were the de facto face of Orthodoxy itself.

(This does not mean haredim are the majority of Orthodox Jews – far from it. It simply means haredim gained enough visibility to appear dominant.)

By the late 1990s, haredim, upset with the "Ultra" designation, pushed some media to use the tern "fervently Orthodox" – as if a YU kollel student or a settler in Hebron were somehow not fervent in their Orthodoxy.

The term "fervently Orthodox" fell out of favor as a result of that obvious flaw, and the media went back to the term "Ultra-Orthodox."

Anyone at all familiar with the Judaism of many Rishonim (medieval Jewish scholars like Nachmanides (the Ramban) or the Chochmei Provence (the Sages of Provence) surely recognizes that haredism is, shall we say, more than just a bit extreme compared to them.

The same holds true for comparisons between haredism and Western European Orthodoxy.

Haredism is basically Eastern European Orthodoxy on steroids, a cartoon version of a cartoon life that never was.

Until then, dressing as if it was January in 18th century Poland rather than July in today's Brooklyn simply shouts extreme. And another word for extreme? Ultra.

Who was it that attached a never before known 'holiness' to the 18th century Polish style of dress and vowed never to change it? Haredim. If that isn't ultra, I do not know what is.

As noted above, Schick says the issue of haredi rabbi-on-boy rape and sexual abuse is blown out of proportion.

In what passes for Schick's mind, and as evident from his earlier ranting on this subject, any report about rabbis raping little boys must be balanced by including prominent mentions of the rabbis who are not abusers, the children who have not (yet, anyway) been abused, and a liberal sprinkling of other positive information about the haredi community.

In Schick's world, no bad news can stand on its own.

However, Schick is perfectly willing to let good news stories about haredim – even outright fluff pieces – stand on their own.

Schick is quick to criticize any media outlet that would dare to take a story on virtues of haredim and sprinkle it , even lightly, with mention of abused haredi children or the like.

Schick thinks the use of "Ultra-Orthodox" leads people to expect too much from haredim – and not enough from everyone else.

Schick sees this as a cause for the media's 'bias' – especially its 'bias' when covering haredi rabbi rapists.

Of course, the problem is not caused by the name haredim are known by in America and the West.

The problem is caused by a haredi culture that has allowed certain crimes – money laundering, welfare fraud and other scams come to mind, along with rabbi-on-boy sexual abuse – to fester. At the same time it persecutes those rabbis' victims and screams "Antisemitism!" at media who dare to report it.

If haredim were openly and honestly dealing with these problems, the media would report the crimes, to be sure – but it would also report the steps taken to purge the community of criminals and protect the community's most valuable possession – its children.

But the media cannot report what is not there.

Bt screaming antisemitism and bias where there is none, Schick contributes to the perpetuation of the very situation he rails against.

But Schick also perpetuates abuse. His actions guarantee more children will be harmed.

The Jewish Week has run Schick's ads for years. For a time, those ads ran without mention they were paid advertisements. After pressure from bloggers, including me, the Jewish Week added back the disclaimer it said had accidentally slipped away.

Schick refuses to say who pays for his weekly ad, and the Jewish Week has never disclosed who pays to run it.

If the Jewish Week continues to run Schick's ravings, it needs to disclose who pays for them.

Schick is like a hired hit man for haredim. But just as the man who pulls the trigger is liable, so is the man who sent him.

The time has come for that question to be answered.

Marvin Schick Gets It Wrong Again