Gary Rosenblatt of the New York Jewish Week reports Dor Yeshorim, the haredi nonprofit that tests marriageable age Orthodox Jews for genetic diseases, has refused to tell clients they have Gaucher's Disease, a treatable genetic disorder that when untreated can cause intense suffering and shorten life.

Even worse than that, Dor Yeshorim discourages testing for the disease.

What Gary may not have known is that Dor Yeshorim also tries to drive other, similar nonprofits out of business.

It removes any client from its register if that client has been tested at another, non-Dor Yeshorim facility – even if that facility is a continent away.

The following program was scheduled in Melbourne, Australia, this past May and advertised in part by community email:


This test is now available for 7 conditions.


This test does not involve taking blood – only a simple swab from inside the cheek.


Also you have the option of getting results of the test.


and Uni students who present their student ID card

But that email was quickly followed by a second email that sheds light on Dor Yeshorim's methodology, especially this line:

PLEASE NOTE: Dor Yeshorim will remove anyone from their register if they discover that this person has been tested at a non Dor Yeshorim service, irrespective of location/country.


Here is the full text of that email:

Important! For the community’s attention.
Dor Yeshorim is an organization that offers genetic screening to members of Orthodox Jewish communities. Its objective is to minimize the occurrence of genetic disorders common to Jewish people. It is based in Brooklyn, New York, but has offices in Israel and various other countries

At present, testing is offered for:

When two members of the system contemplate marriage, they contact the organisation and enter both their PINs that is given to them by Dor Yeshorim upon testing. When carriership of the same disease is present in both, the risk of affected offspring is 25%, and it is considered advisable to discontinue the plans.

· For anyone contemplating shidduchim, especially in US, the testing by Dor Yeshorim is vital.
It is usually required by shaddchonim and prospective shidduchim.

· Dor Yeshorim does not accept anyone who has been tested by another testing facility.

PLEASE NOTE: Dor Yeshorim will remove anyone from their register if they discover that this person has been tested at a non Dor Yeshorim service, irrespective of location/country.

The purpose of this notice is not to Chas V’sholom cast dispersion on
Tay Sachs tests being conducted in Australia by
non-Dor Yeshorim services.

However, as the Dor Yeshorim Program is the prevalent and most widely accepted
Tay Sachs reference bureau in the USA, there is a very significant risk (particularly so when
the prospective Shidduch is an American) that complications may/will emerge
resulting in much hurt, angst and cessation of the Shidduch deliberations.

To get an idea of how frantic that email really is, here is a screenshot of it. Please click to enlarge: 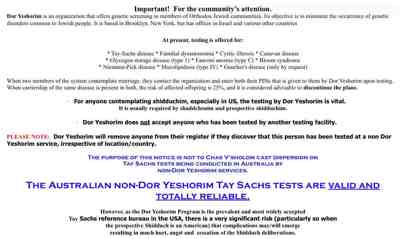 The driving motivation behind Dor Yeshorim's behavior seems to be avoiding the minefield caused by haredi stigmas associated with birth defects, mental retardation and other diseases.

While finding a way around haredi issues is necessary, that way around must also take into account what can be done to heal those who carry diseases like Gaucher's.

That would, one would think, be self-evident.

What follows is the Jewish Week report:

A national medical expert charged this week that the head of the leading organization screening for Jewish genetic diseases is “playing God” by withholding information from people who have tested positive for Gaucher’s disease, a serious and often painful illness that effects one in 450 to 500 Ashkenazim, making it the most common of Jewish genetic diseases.

Dr. Stuart Ditchek, director of the Jewish Genetic Diseases Consortium, a nonprofit organization founded two years ago to increase education and awareness, and encourage genetic testing, told The Jewish Week that Rabbi Joseph Eckstein, the founder and director of Dor Yeshorim (Generation of the Righteous), the largest screening program of its kind, dissuades people from testing for Gaucher’s so as not to discourage young men and women who may be carriers from marrying each other.

What’s more, Ditchek charges that Rabbi Eckstein has acknowledged that he has not informed people who have tested positive for Gaucher’s that they have the disease.

“He is playing God,” Ditchek said of Rabbi Eckstein, asserting that there is no ethical or halachic basis for depriving such medical information from a patient.

Due to medical advances over the last two decades, enzyme replacement therapy has proven quite successful in treating and controlling Gaucher, with the best results occurring when it is detected before the patient reaches his or her late teens.

“Several medical experts and I have met with the rabbi and shown him the research, and explained that we can save these people from a life of suffering,” said Ditchek, a Brooklyn-based pediatrician. “We told him we know he has the information and that he needs to inform these people [of the results], but he resisted.”

Dor Yeshorim regularly tests some 17,000 people a year, almost exclusively in the Orthodox community here, in Israel and Europe, for a “panel” of nine genetic diseases, including Tay-Sachs and Familial Dysautonomia. The group used to include Gaucher’s, but now only tests for it “by request only,” according to its literature.

According to Ditchek, Rabbi Eckstein has said that he has blood samples from more than 100 people his organization tested more than 15 years ago, and whose results were positive for Gaucher’s.

Contacted by The Jewish Week, Rabbi Eckstein denied that assertion, but said, “We don’t believe it is right to say ‘don’t get married because of Gaucher’s.’” He added that “years ago it was serious enough to test for it because people could die. Now that there is treatment for it, we feel uncomfortable telling young people [to be tested]. I believe it is a disservice to tell them not to get married.”

He declined a full interview unless given the right to review and “veto” the story if it did not meet his approval. He said he mistrusted the media because it is prone to inaccuracy, particularly on “delicate” issues like this.

Rabbi Eckstein is no stranger to controversy. The pioneer in screening programs for Jewish genetic diseases, he founded his organization in1983, dedicated to the elimination of Tay-Sachs — the rabbi lost four children to the disease — and the promotion of healthy marriages among chasidim, later expanded to the wider Orthodox community.

According to the organization’s literature, Dor Yeshorim was established “to provide protection from predominantly Jewish genetic diseases, while safeguarding individuals from the psychological stigma of carrier status knowledge.”

Most participants in the screening program are young couples considering marriage. They are tested through Dor Yeshorim and receive an identification number. They later call a hotline and are simply told whether or not they are compatible, based on the results of the screening. If both the man and woman are carriers of the same disease they are considered incompatible.

Dor Yeshorim is widely credited for helping to virtually eliminate new cases of Tay-Sachs from the community, but some critics oppose the organization’s methods on moral grounds, primarily because it does not notify participants who test positive as to what disease they are carriers of or refer them for evaluation and treatment.

The medical data on Gaucher’s is clear that early detection and treatment can help a person avoid a life of increasing misery.

Dr. John Barranger, an international expert in the field from the University of Pittsburgh who has done groundbreaking work on Gaucher’s, said “the disease is slowly progressive. It is highly treatable through enzyme therapy and, when found at a young age, a person can be disease-free.” If not treated, though, “the ravages of the disease can lead to enlarged liver and spleen, bone marrow failure and erosion of the skeleton,” and “can cause early death.”

He said it was standard practice in the medical field for screening agencies to provide pre-test and post-test counseling, and for carriers to be given detailed information, including the risks to themselves and to having children.

Dr. Neil Weinreb, another world expert on Gaucher’s and author of data on the benefits of prompt treatment, noted that Rabbi Eckstein’s style in confidential testing is “unique” in its “paternalistic” approach to clients.

Weinreb said that some people with Gaucher’s could live a full life disease-free while others can be “seriously affected.

“There is no question that if someone has the disease, he or she has the potential” for becoming seriously ill at some point and should be informed.

“As a physician,” Weinreb added, “I feel people have the right to know and make decisions, based on ethical and halachic grounds.”

He said he had heard the argument that if a person with Gaucher’s has symptoms, he will go to the doctor and be diagnosed, so why inform such a person beforehand? But Weinreb dismissed such logic, asserting that besides being immoral, it is medically unsound because early detection is most effective and because some people could be misdiagnosed.

But Dr. Edwin Kolodny, medical director of Dor Yeshorim, said it was unfair to accuse Rabbi Eckstein of “playing God,” noting that the focus of the anonymous screening programs is to determine, if two specific individuals were to marry, whether they would be at risk of having children with a severe, incurable disease, and to prevent the stigmatization of families.

“A person is not told if he or she is a carrier because that is not relevant to the program, which is not obligated to disclose disease information,” said Kolodny, who chairs the department of neurology at NYU Medical Center. “It is designed to let people know they can reproduce without fear, and to avoid any stigma in the community.”

He did acknowledge that not informing clients that they have Gaucher’s “does raise an ethical question,” pitting a doctor’s responsibility to provide medical information against Dor Yeshorim’s conviction that pregnancies should not be terminated in the case of Gaucher’s. That is because in most cases it does not create a significant medical problem, he said, with many people living healthy lives and never knowing they have Gaucher’s. And if there is a problem, he added, it can be diagnosed and treated, though he noted that the disease often is misdiagnosed.

Kolodny also pointed out that some experts believe people with Gaucher’s have an intellectual advantage. (For example, Rabbi Adin Steinsaltz, considered a genius by many for his monumental work in translating the Talmud into Hebrew, has been treated for Gaucher’s.)

But critics in the medical community insist that Dor Yeshorim must change its policy and inform clients found to have Gaucher.

“Hiding behind confidentiality is just not appropriate,” said Ditchek of the Jewish Genetic Diseases Consortium. “You have to break your rule when not to do so may relegate a person to a more painful life,” or even shorten it.

Ironically, the tagline on Dor Yeshorim’s brochure, recruiting for its genetic screening test, states: “You can prevent a lifetime of suffering.”

That’s exactly what Ditchek is saying, in effect, to Rabbi Eckstein.