Groups battle over credit for baby Moshe
By Jacob Berkman 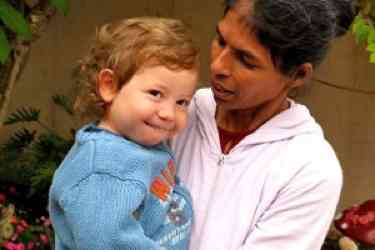 Moshe Hertzberg, being held by the nanny, Sandra Samuel, who rescued him, was at the center of a face-off over his future care. (Chabad.org)

NEW YORK (JTA) -- Something of a philanthropic tussle broke out between two organizations vying to take credit for their role in helping to care for the orphan of the two Chabad-Lubavitch emissaries slain in the Mumbai attacks.

But tensions between Chabad and Migdal Ohr, a 70-acre youth village in Israel, appear to have eased since they surfaced in the aftermath of last month's terrorism in the Indian financial center.

Organizations have mounted numerous public relations campaigns -- some of them explicit fund-raising drives -- in the wake of the attacks, in which Islamic gunmen killed more than 160 people. Rabbi Gavriel and Rivkah Holtzberg, who ran the Chabad outreach center at the Nariman House, were among the victims.

The most high-profile campaign to date has centered on the Holtzbergs’ 2-year-old son, Moshe, who was rescued heroically by his nanny and cook, Sandra Samuel, an Indian woman who fled the house with the toddler during the terrorists’ siege.

Less than an hour after the Holtzbergs’ deaths were made official, the head of Chabad’s world outreach program, Rabbi Yehuda Krinsky, told reporters that Chabad would care for Moshe.

“The world of Chabad-Lubavitch and its emissaries will adopt this beautiful toddler and raise him, and give him a beautiful upbringing,” an emotional Krinsky announced at a Chabad news conference in the Crown Heights section of Brooklyn on Nov. 28.

The organization set up two charitable funds: One to help raise money for Moshe’s upbringing and one to rebuild the Chabad in Mumbai.

But as Chabad was making its announcement, Migdal Ohr, which was founded by Moshe’s great-uncle, Rabbi Yitzchak Dovid Grossman, and runs an orphanage with some 6,500 residents, told supporters it was caring for the toddler.

On Dec. 1, the executive director of Migdal Ohr’s American fund-raising arm, Robert Katz, sent out a mass e-mail to donors extolling Grossman’s role in helping Moshe. Grossman, who won the Israel Prize in 2004 for his humanitarian work, is also Rivkah Holtzberg’s uncle.

“Where to begin?” the e-mail stated. “Rabbi Grossman and Migdal Ohr to date have expended great financial costs in flying the grandparents to India, as well as flying over the ZAKA rescue team to care for the bodies of the deceased. We have been in constant contact with the Israeli Foreign Ministry in an effort to release the bodies to Israel for burial, and in fact to bring everyone over on one flight back home. One of the causes for the delay until now is that the dead bodies were booby-trapped by the murderers with hand grenades, which required prolonged and careful removal.”

The e-mail went on to say that Moshe would be raised by his maternal grandparents, Grossman’s brother and sister-in-law, and that “Moshe will be enrolled in one of the many kindergartens that Migdal Ohr operates. How fitting!”

The PR promotion by the organization rankled many within Chabad and set off an e-mail exchange between Katz and Chabad rabbis who felt that Migdal Ohr was trying to capitalize on the tragedy.

On Dec. 8, Katz sent out a follow-up e-mail that seemed to put the controversy to rest. He asked that all donations to help Moshe be made through the fund Chabad first established at www.chabadindia.org. Katz explained that several unauthorized fund-raising initiatives had been started without approval by Moshe’s family and said Migdal Ohr wanted to make sure all money went to a credible source.

For his part, Katz defended injecting Grossman into the media narrative surrounding Moshe.

“As the uncle of the deceased, he finds himself in an extremely unfortunate and tragic coincidence that his great-nephew will be attending one of his own day-care centers,” Katz said of Grossman in a private email sent last week to a Chabad representative, which was obtained by JTA. “We, of course, need to use this tragedy to educate the world about Rabbi Grossman, an Israel Prize Winner, and the one-of-a-kind Migdal Ohr village/orphanage."

What strikes me about this piece is that the baby is not being cared for by any of his many aunts and uncles. He is apparently being cared for by elderly grandparents and will, as baby who just turned 2 last week, go to day care at a Migdal Ohr center.

Add to that Katz's assertion, unchallenged by Chabad, that Migdal Ohr – not Chabad – paid for Moshe's grandparents to fly to India, and Migdal Ohr paid to fly ZAKA there to retrieve the bodies.

What – beside fundraising and PR– has Chabad done to help anyone directly effected by this tragedy?

I do know that the "two charitable funds" the JTA says Chabad set up were originally one. The money was at first commingled, so money sent to help baby Moshe – clearly the vast majority of money donated – was mixed up with money to rebuild Chabad in Mumbai.

This commingling drew criticism (some of which you can see on comments left here when I linked to Chabad's fundraising effort).

You can hear Rabbi Yehuda Krinsky, the co-head of Chabad, mention the great fundraising opportunity this tragedy gives Chabad, and that Chabad will have to decide how to channel the funds raised.

Splitting the fund into to separate funds may be a reaction to Migdal Ohr.

At any rate, these facts are not in dispute: Chabad sends representatives to open Chabad Houses, and it does so without any provision for security.

Even though Rabbi Gavriel Holtzberg had received warnings of possible terrorism against Chabad Mumbai (he reportedly was reading an anti-terrorism manual when he was killed), Chabad World Headquarters had done nothing of merit to deal with those threats.

That business model has failed.

Perhaps a fitting memorial to those who died in Mumbai's Chabad House would be a new Chabad business model – one that allocates funds to provide security for Chabad Houses in Mumbai, Marseilles, Manhattan and beyond.