The full court filing is at the bottom of this post.
All images posted below can be clicked to enlarge. 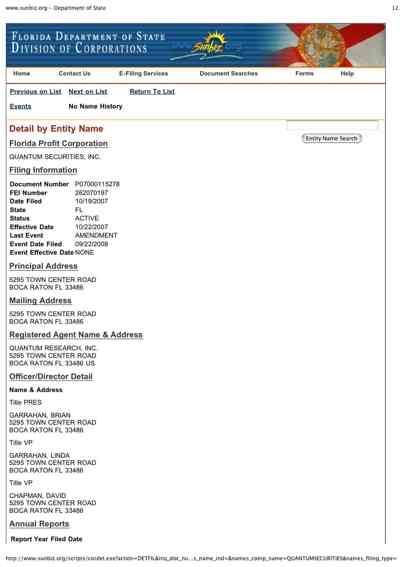 Quantum's owners include Brian and Linda Garrahan and David Chapman.

Brian and Linda Garrahan are linked to several Florida companies, many of which appear to have been started in the last third of 2007 and share office space with Quantum Securities. 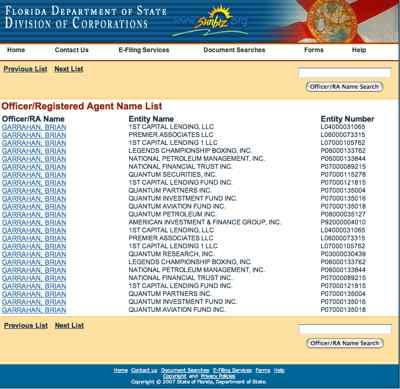 Here is Quantum's filing with US Bankruptcy Court: 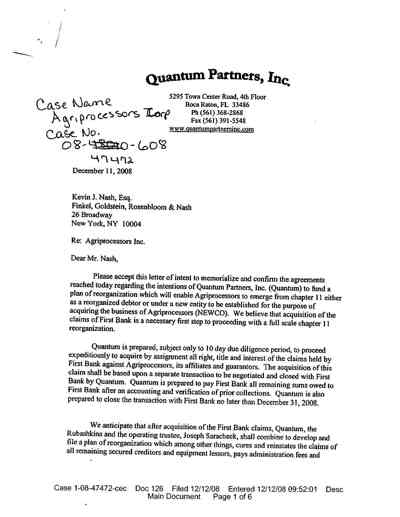 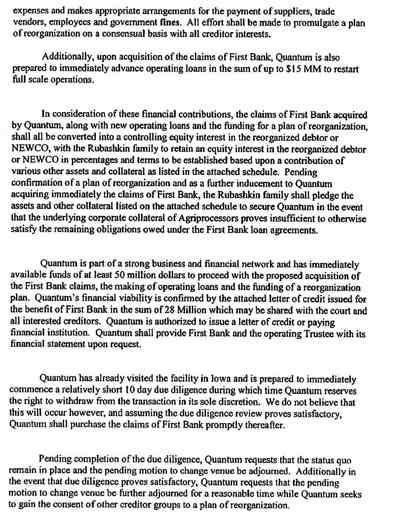 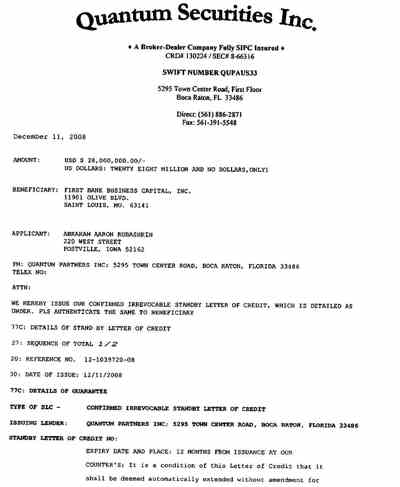 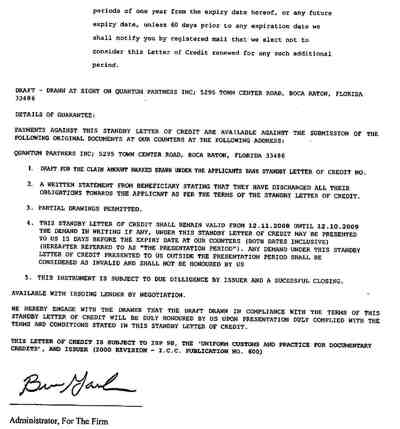 It is difficult to say at this point whether or not Quantum is really legitimate.

That said, a company this new, with so many associated business names and corporate officers with no public track record screams out scam.

Do not hold your breath.

Sarachek's job is to sell Agriprocessors for the highest amount of money to anyone who will pay it, all other factors be damned.

On that damned list are Postville and pretty much everyone else.

Which is the real signature of Brian Garrahan? 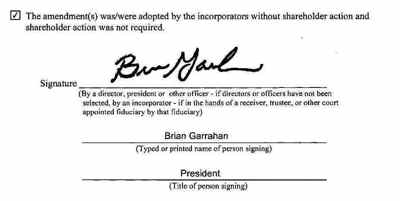 The second signature matches Thursday's Letter of Cedit filed with US Bankruptcy Court.

The first matches all other filings with the State of Florida.

The signature on the Letter of Intent is that of Marxx Theresias, who is listed as VP of Quantum Partners, which is the parent company of most, perhaps all, of the companies listed above. 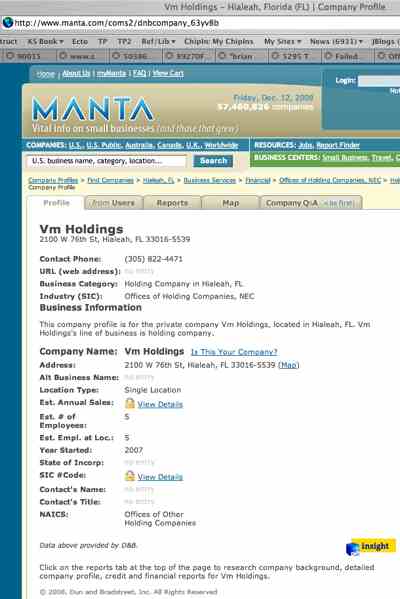 Quantum Partners has a website. No links are active within any of the pages so, for example, the various projects and services do not lead to any documentation or further information: 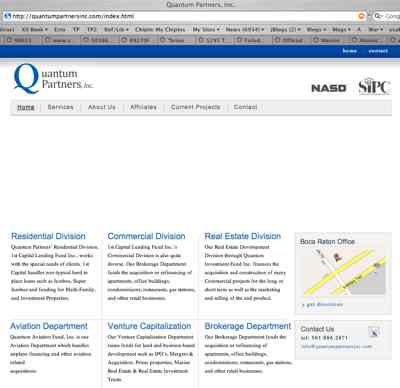 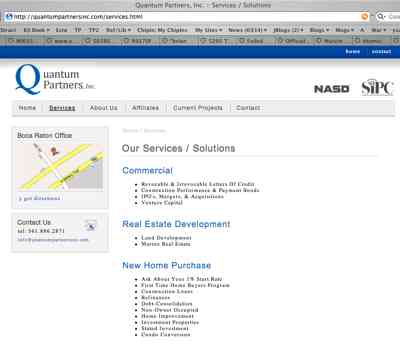 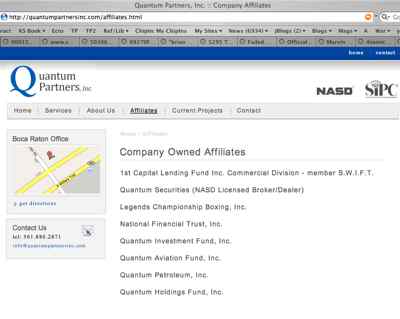 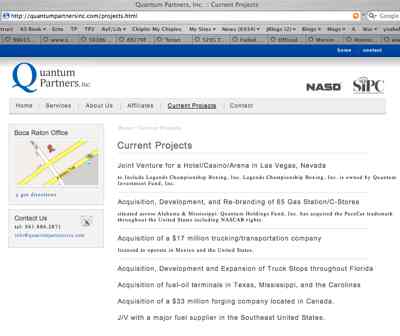 It failed to file its 2008 audit, perhaps because David Chapman, originally a principal of the company, was deleted from the company's officers on May 2, 2008. Chapman was a licensed broker. The Garrahans are not.

First, the suspension, from FINRA.org: 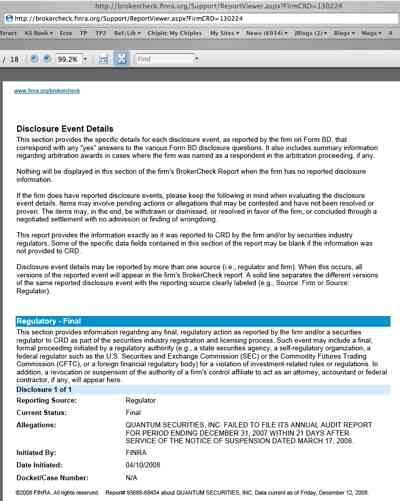 Below is that May 2, 2008 filing removing Chapman: 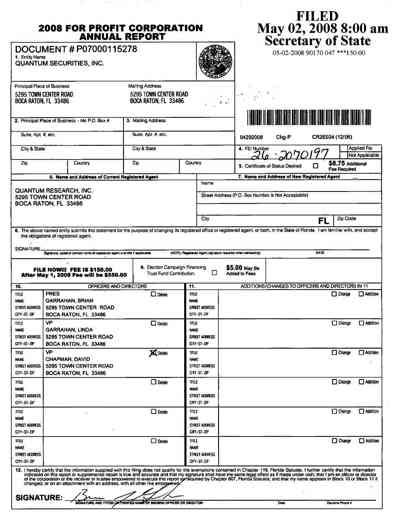 Here is the entire amendment (in PDF) filed September 22, 2008 reinstating Chapman as VP:

And here is a screenshot of the key section of that amendment: 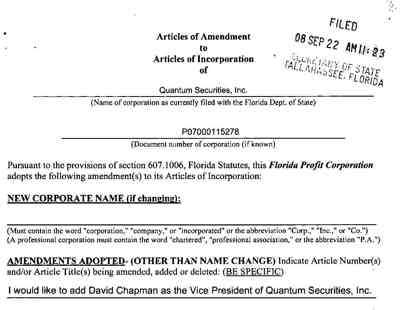 Quantum filed its audit – it claims – on September 15, 2008, 4 1/2 months after the suspension. It still awaits reinstatement: 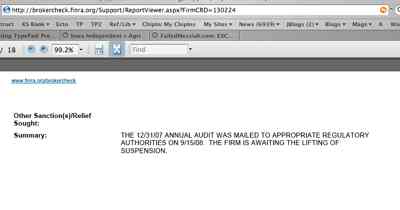 Quantum Securities was incorporated on October 22, 2007. In its 13 1/2 month existence, Quantum Securities has been in regulatory trouble for 4 1/2 months (more if that audit "mailed" in September is not accepted or if it was never mailed)– that means the company has been in regulatory trouble for at least 1/3 of its short life.

And these are the people the Rubashkins want to do business with.

In the comments section, Jason reports that both Brian and Linda Garrahan filed for bankruptcy. Her's was a Chapter 7 filed in 2001. His is a Chapter 13 filed in 2004.

I don't yet have PDFs of screenshots to prove this, but Jason is a very reliable person.

Postville, I'm sorry to tell you this, but it looks like the worst is yet to come.