Chabad, God And The Rebbe: The Lines Continue To Blur

The above video, posted on HaMercaz.com, is of Chabad rabbi Boruch Shlomo Cunin, one of the most powerful (and most senior) rabbis in the movement.

Cunin heads Chabad in California, along with Chabad in Nevada and other parts of the west.

Rabbi Cunin is also active in Russia, and has been a leading figure dealing with the Russian government in attempts to recover parts of the library of the 6th Lubavitch rebbe, Yosef Yitzhak Schneersohn.

Speaking during the Mumbai terrorist attacks in November 2008, Rabbi Cunin says we will see great miracles and that "it is beyond any question" the Chabad hostages will be rescued, and that it is "beyond any question we are in the last moments of golus (exile)." The Rebbe, Menachem Mendel Schneerson, Rabbi Cunin says, will come to "take us out of golus now" and everyone "will understand and see it's the Rebbe who runs this world." 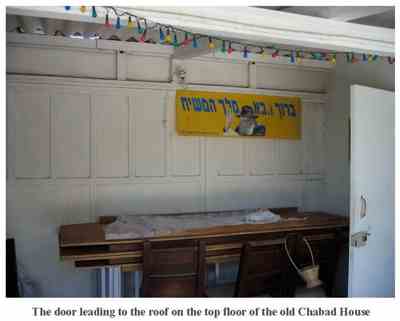 This picture was taken in Chabad House of Mumbai, shortly before its move to Nariman House – the building eventually taken over by Islamic terrorists in a bloody siege late November 2008.

The picture is taken from a long article written by sometime FailedMessiah.com commenter Isaac Balbin as a memorial for his friends, the murdered Chabad rabbi of Mumbai and his wife, Gavriel and Rivki Holtzberg, HY"D.

Posted at 03:11 AM in Chabad, Chabad & Christianity | Permalink

Chabad, God And The Rebbe: The Lines Continue To Blur