Please make sure to see the update at bottom of this post. Thank you.

This is one of the videos banned by YouTube and then, as you'll see below, reinstated after viewer and blogger pressure:

But this is not graphic footage. You don't see body parts or blood.

Still, YouTube's parent company, Google, felt it necessary to remove that and other videos – all of which make Israel's case for war.

What Google has done is clearly censorship of the worst kind.

And that censorship by Google continues, as you'll now see.

This is how the the IDF Channel's home page looks now. Please click to enlarge: 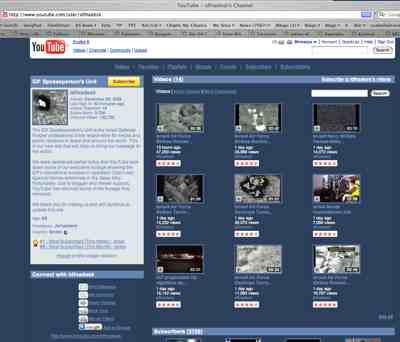 This video or group may contain content that is inappropriate for some users, as flagged by YouTube's user community.

By clicking "Confirm", you are agreeing that all videos or groups flagged by the YouTube community will be viewable by this account.

The IT Examiner notes this isn't Google's first – or its most draconian – use of censorship:

Youtube censors Israeli Army videos
Reinstates 'some of the footage'
By Aharon Etengoff in San Francisco @ Wednesday, December 31, 2008 6:30 AM

One of the banned videos was a clip showing a cell of Hamas operatives being targeted in an IAF (Israel Air Force) strike as they loaded rockets onto a truck.

"We were saddened earlier today that Youtube took down some of our exclusive footage showing the IDF's operational success in operation Cast Lead against Hamas extremists in the Gaza Strip," said the IDF Spokesperson's Office. "Fortunately, due to blogger and viewer support, Youtube has returned some of the footage they removed."

The channel, which currently boasts over 3,000 subscribers, recorded over 132,805 views in just two days.

Youtube maintains a Terms of Service that prohibits the posting of videos which violate copyrights or depict pornography, illegal acts, gratuitous violence, or hate speech. User-posted videos that violate such terms are subject to removal and replaced with a message stating "this video has been removed due to terms of use violation".

To give you an idea of how truly draconian Google is, I was banned from Google's AdSense program more than four years ago.

Why was I banned?

My site – at that time a tame collection of documents from rabbis on the Jewish status of Ethiopian Jews, and a collection of newspaper accounts of Chabad messianism – was flagged as being "against a group or individual," and therefore in violation of Google's terms of service.

That group or individual? Chabad and its late rebbe.

I pointed out to Google that it had not banned thousands of sites that were anti-Bush, anti-Clinton, anti-Gore, etc. I also asked a question: If I put up a site that was anti-KKK, that exposed the racism and violence inherent in the Klan, would that site be banned?

Google refused to answer the question. It also refused to lift the ban, which stands until today.

In fact, I launched two new websites, one in late 2007 and another this summer. The first site had nothing to do with Judaism, Chabad, politics, Israel or anything controversial. It was a health site related to a specific illness.

When I got ready to launch that website, I reapplied for Google AdSense and was accepted. I briefly placed Google ads on FailedMessiah and on the new site. After a week or so, Google banned FailedMessiah again. But, in an email Google clearly said that my new website or other sites I may start would not be affected by the ban. And that is how it should have been because the new website did not violate Google's terms of use.

Less than a week later, Google banned my new website, as well – even though the content had been static for the entire period in question. In other words, the content it banned was the exact same content it had approved.

Google refused to explain this new ban or change it.

Late this summer, I launched the second new website, OpenSourceHalacha.com. Google banned that, as well, even though all the website does is print and translate Jewish legal decisions and sections of the Shulchan Aruch, the standard Code of Jewish Law.

Google has no appeals processes and is notorious for chucking people out of AdSense without warning or recourse.

UPDATE: Google-YouTube has a Multinational Force in Iraq channel with videos like the IDF video Google censored.

Google does not censor those MNF-Iraq videos.

Posted at 03:58 AM in Israel, Media & Media Criticism | Permalink