Torossian is slated to be honored by the (very right wing) Zionist Organization of America later this month.

What award is Ronn getting? 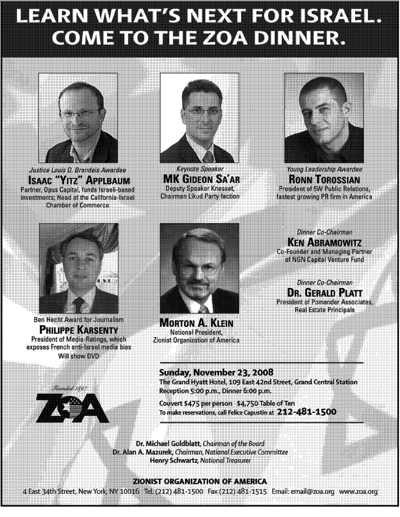 Ten days ago, Jeffrey Goldberg of the Atlantic monthly quoted Ronn this way:

"I think we should kill a hundred Arabs or a thousand Arabs for every one Jew they kill." I was somewhat taken aback, of course, because this is a Nazi idea, rather than a Jewish idea. I asked him to explicate: "If someone from a town blows himself up and kills Jews, we should wipe out the town he's from, kill them all. The Israelis are suckers. They should have destroyed Jenin." He went on like this for some time. I would only note that Torossian, to the best of my knowledge, never volunteered for the Israeli army, so he seemed to me by definition a chickenhawk.

Torossian is slated to be honored by the (very right wing) Zionist Organization of America later this month.

What award is Ronn getting?