In Guatemala, Deported Agriprocessors Workers React To $10 Million In Fines

Agriprocessors is hit with $10 million in fines for state tax and wage violations. What do Agriprocessors former workers, now back home in Guatemala, think about this? 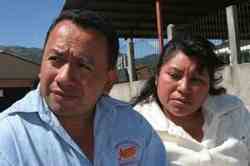 Morales, 38, and his wife, Maria Merino Matias, 39, were among hundreds of Guatemalans who immigrated illegally to the United States so they could work at the Postville meatpacking plant. She was arrested during the May immigration raid by federal officials. He managed to escape the dragnet that day, but he returned home in July. She arrived here earlier this month, after serving a five-month prison sentence and being deported.

The couple were glad to hear Wednesday´s news about Iowa authorities wanting to fine Agriprocessers nearly $10 million. Morales and Merino are jobless, and they hope they´ll receive some of the money the company owes them. They said they would use it to help keep their four children in school.

Merino said that if workers brought broken hard hats, boots or other equipment to managers, the managers would replace the items. “They did not tell us we would be charged for those things,” she said in Spanish. “Our co-workers would say, “Be careful, be careful, they´re going to charge you for that.”

The couple spoke Wednesday outside a school where one of their children was graduating from sixth grade.

Hundreds of former Agriprocessors workers live in this town or surrounding villages in the mountains west of Guatemala City. Morales was easily identified as a former Agriprocessors employee, because he was wearing a denim-blue work shirt emblazoned with the red logo of “Aaron's Best, Glatt Kosher,” which is one of the company's main brands of meat.

He said that before he left Iowa, a Postville priest accompanied him to the plant and helped him try to get the money owed to him and his family. But he said they were turned away.

In Guatemala, Deported Agriprocessors Workers React To $10 Million In Fines

Agriprocessors is hit with $10 million in fines for state tax and wage violations. What do Agriprocessors former workers, now back home in Guatemala, think about this?