How many exploited Agriprocessors' workers can be crammed in one rundown house or apartment? And who actually owns those substandard, overcrowded housing units?

The Des Moines Register has a brief article explaining property ownership in Postville.

The Register found the two largest property owners in the town of Postville are Nevel, owned by the Rubashkin family, and GAL Investments, owned by fellow Chabad hasid Gabay Menachem.

But there is more to the story than what the Register found. I'll tell you what that is in a moment. First, the Register article:

Postville, Ia. - The raid on the Agriprocessors meatpacking plant four months ago has brought attention to the conditions in which many of the Postville plant's workers live, including allegations of substandard rental housing and reports of workers being packed into apartments.

A Des Moines Register analysis of county real estate records found that two companies dominate the rental market in Postville. One is owned by the president of Agriprocessors; the other has its rent payments deducted from the paychecks of its tenants who work at Agriprocessors.

Postville city officials are now considering the unusual move in a small town of regulating rental properties. City Clerk Darcy Radloff said the claims of substandard living conditions have come to light since the northeast Iowa town was rocked by the immigration raid at Agriprocessors.

The rental-property inspection system would set rules on maintenance and building condition, and it would require that no more than two people sleep in each room. Inspections would be financed by fees paid by landlords.

The town has been in the national spotlight since federal agents swooped in on Agriprocessors and arrested 389 workers accused of being in the United States illegally. Many of those workers lived in rental houses in Postville, and some of the workers' replacements have raised allegations of poor living conditions.

The Register analysis of county records found that two rental companies own nearly 14 percent of properties in Postville, located astride the border of Allamakee and Clayton counties.

Of Postville's 916 total parcels, Nevel Properties owns 67, worth about $4.7 million. The company's president is Sholom Rubashkin, an Agriprocessors executive who ran the packing plant for years. GAL Investments, whose president is Gabay Menahem, owns 59 properties, worth about $5.2 million.

Both companies' holdings are mainly modest-sized houses, though they also own several commercial buildings downtown.

No one else in Postville owns nearly as many properties, records show.

Menahem said he has no serious qualms with the proposed housing ordinance, including the idea of having an inspector who could order repairs. He questions the timing of the move, saying Postville should be helping struggling businesses survive. But he said other landlords would have more to fear.

Rubashkin did not respond to several requests for comment.

The Rubashkin family also allegedly owns a piece of another company, co-owned with Ron Wahls, that owns more housing.

And several people who closely follow the situation in Postville have told me they believe the Rubashkins also own a large piece of GAL Investments. If true, that means the Rubashkin family directly controls the vast majority of all available rental housing in Postville.

Much of this housing is run this way: A worker is charged a per week fee, about $150, and lives in a crowded house with 9 to 11 other workers.

While the house is billed as furnished, what it often contains is mattresses on floors, perhaps a folding chair or two, and a kitchen table. There may also be an old broken down couch.

Workers can move up from that to a less crowded situation. 4 or 5 workers share an apartment or a very small house, 2 or 3 to a bedroom. Rent is about $260 per month per worker. The apartments are billed as furnished but are often "furnished" as described above.

The housing is rundown and ill-kept. Ceilings leak. Bathrooms don't work. Screens are missing from windows. 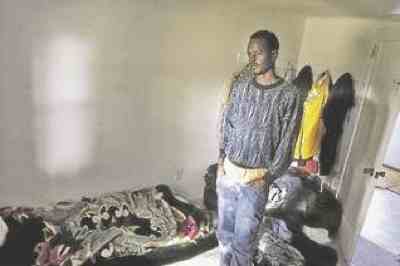 Ibrahim Abdi stands in his bedroom in the Postville duplex he shares with three others. Abdi has the only mattress in the house; the other men were sleeping on blankets on the floor. (Register photo.)

How many exploited Agriprocessors' workers can be crammed in one rundown house or apartment? And who actually owns those substandard, overcrowded housing units?