…most Jewish music is profiled by the BBC today. Here is what Rabbi Efraim Luft has to say: 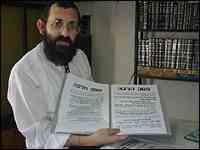 What Rabbi Luft objects to so vehemently is not just contemporary, western music - rock, rap or pop - but the use of modern instruments and beats in the tunes of orthodox singers like Lipa Schmeltzer.

"The main part of the music should be the melody. Percussion should be secondary. They should not bend notes electronically and should not use instruments like electric guitars, bass guitars or saxophones in Jewish music," he says.…

A serious, studious man the rabbi explains how he thinks modern music is disrespectful, leading young people astray and can lead to the collapse of education and the family system.

The use of percussion accompaniment in slow, quiet music is generally ridiculous. 2/4 beats and other rock and disco beats must not be used

It is a broad charge, but the rabbi is convinced that in the last 25 years music has gradually eroded moral standing in society.

Saying that music is "powerful", he says the "purpose of modern music - its influences - is to distract young people and change good characters into bad".

The Rabbi says such music, even Jewish rock music, "where the dangerous beat plays more of a part than the melody, has no place in a society where people are trying to keep their moral standards high.…

This is the same Rabbi Luft who approvingly quotes from racist Ku Klux Klan publications to support his crackpot, ahistorical, nonsensical theories.

Here are Rabbi Luft's rules for playing 'kosher' music, courtesy of the BBC: 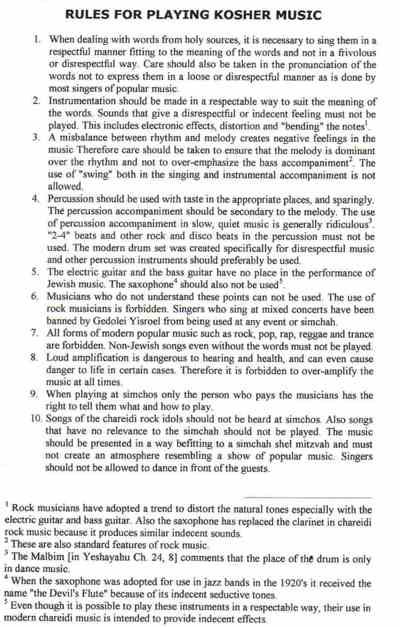