« Haredim and the Holocaust, cont. | Main | OU President: Agriprocessors Has "Lost A Lot Of Credibility" »

They came from Kyrgyzstan --- a former Soviet state on China's west border – to study in American universities and thought Agriprocessors would be a good summer job. 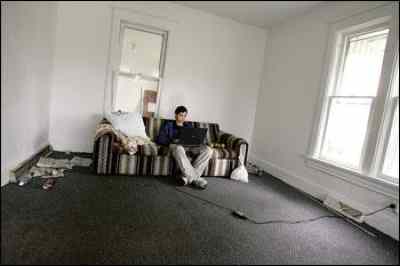 POSTVILLE --- After a long day of butchering chickens at Agriprocessors, Elgiz Ajibayev sits on a stained, sagging couch --- the only furniture in a room lit by a single light bulb.

He opens up his laptop and reads a few e-mails, then checks his classes for the upcoming semester at Georgetown University, where the fourth-year exchange student studies accounting and finance.

Ajibayev, 22, is one of a dozen college students from Kyrgyzstan --- a former Soviet state on China's west border --- who spent his summer vacation working at Agriprocessors, the embattled kosher meat processing plant.

Ajibayev, like the rest of the students, arrived on a whim, thinking his time in Postville would be a short footnote in his U.S. adventure; a place to earn some extra money and see America's Heartland.

"My friend (in New York) told me it would be great if I came somewhere inside country so I can learn more about American cultures," he said. "He told me about this place."

But after six weeks, Ajibayev can confidently say things didn't turn out quite as planned.

"This terrible place, Agriprocessors, it's the only thing I will remember of this town --- nothing else. This is why I'm deciding when I leave this place I will never be back here," he said.

When Kali Bayalieva's parents found out about her new line of work, they told her she would be hopping on the next flight home --- immediately.

Bayalieva spent her days on the production line as a quality inspector. The job primarily consisted of throwing away rancid, green chicken, and washing clean any meat covered in fecal matter.

It's a mind-numbing job, one she acknowledges she could have performed with more diligence.

"Sometimes chickens just go by and I'm asleep. I try to stay awake, but yeah --- I work about 10 hours a day. It is a really long time," she said.

Bayalieva and Ajibayev said Postville's housing market puzzles them. Like so many other workers who arrive in town, Ajibayev says he found the home in disrepair.

Reflecting on how it compared to the house he grew up in, he said he spent his childhood in Soviet Kyrgyzstan --- so everyone lived the same.

But was it better than his current [Postville] residence?

"Of course. This is not a house. It's a place to sleep, nothing else," he says.

Then there's the price --- $225 per month to share a room in a four-bedroom house. Bayalieva says she rented a room in a big southern-style home, Jacuzzi included, during her stay in Charleston, S.C., earlier this summer. She said she particularly loved the beautiful pink walls of her bedroom.…

They came from Kyrgyzstan --- a former Soviet state on China's west border – to study in American universities and thought Agriprocessors would be a good summer job.