So say the people feeding and helping these new hires. And below we seem to have… 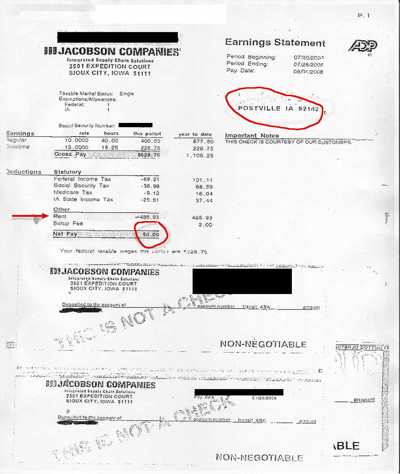 Note this new hire has only worked two weeks. This is his second paycheck. The first check had a gross pay amount of under $500. Deducted from that check would have been, at bare minimum, travel, set up and other fees. Also deducted would have been any cash advances received. And, most likely, rent, as well.

To my knowledge there is no relationship between Jacobson on the one hand, and Lubavitch or Agriprocessors on the other - other then a business relationship.
The pay stub above is consistent with other pay stubs I have seen from current employees. Some have stated that they never asked for or received a "loan" from the company but found deductions for a loan on their pay stubs.

Many workers complained that recruiters told them their first month rent would be free only to arrive in Postville and find rent deductions from their first checks for rent. I understand that Jacobson is subletting apartments from the Rubashkin owned Nevel Real Estate Company and from Gal Investments. If this is incorrect, I'm sure Getzel will let us know.

The relationship between Gal and Nevel is not clear, however when the Director of Nevel went on vacation, Gal rented Nevel apartments.

Instead of furnished apartments, workers have generally found a mattress on the floor, one television set for everyone to share, and if they're lucky, one light bulb. People in town have helped new workers with pots and pans, lamps, etc. Reporters have I believe noted that some of these houses have 10 to 12 people living in them. At $100/person/wk that means such a property is producing $4,000/month, making them one of the more lucrative enterprises in Postville.

I will try and get copies of other pay stubs this week.

Keep in mind that we are still at the beginning of the legal charges, not the middle and no where close to the end.

GAL Investments is owned by a Chabad hasid, Gaby Menachem. The Rubashkins themselves are, of course, Chabad hasidim, as well.

So say the people feeding and helping these new hires. And below we seem to have…