If anyone had any real doubts about this trip, see…

…the list of participants from Matzav.com, which I redid as a color-coded chart. Please click to enlarge: 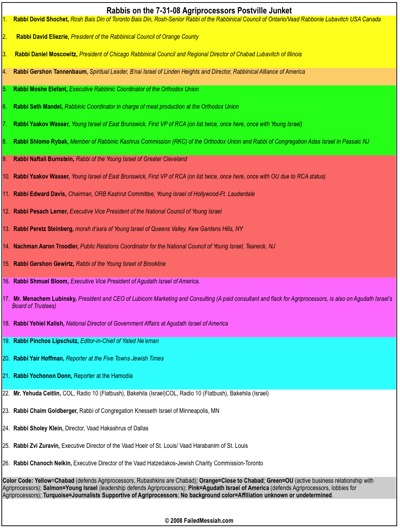 “This mission is meant to provide Jewish leaders from across the United States with a factual perspective of the true situation at the Agriprocessors plant, untainted by the rumors and innuendos that have been circulating in many circles,” said Rabbi Pesach Lerner, Executive Vice President of the National Council of Young Israel, before leaving for Postville.

“As one of the major producers of kosher meat in the US, the success or failure of Agriprocessors is an issue that will directly impact Jewish communities that purchase kosher meat and poultry across the country. The situation warrants that we approach this with an open mind and obtain a first-hand account of the situation so that we can draw our own conclusion for the betterment of the American Jewish community.”

Today, the group will tour the Agriprocessors plant and facilities, where there will be meetings with corporate officials and managers, including Jim Martin, a former US Attorney responsible for all compliance issues for Agriprocessors. The group will also meet with senior representatives of the kashrus organizations who certify the plant. In addition, they will meet with the Mayor of Postville and other local elected officials who will lead them on a tour of the Postville community.

Note: No meetings with displaced workers, local clergy, or the food shelf are scheduled.

The leadership chosen for this trip are all closely affiliated with or lead organizations openly in support of Agriprocessors, and the media invited is all haredi and all seems to be completely in Agriprocessors pocket.

There are no critics of Agriprocessors on this list.

So much for open investigation and lack of bias.

Here is a list of the rabbis without color-coding:

19. Rabbi Gershon Gewirtz, Rabbi of the Young Israel of Brookline

If anyone had any real doubts about this trip, see…