Moshe and Shalom Rubashkin need to repay the EPA $450,000 for the money the EPA spent cleaning up Moshe Rubashkin's abandoned Montex textile mill in Allentown, PA.

Moshe and Shalom asked the court to delay sentencing to allow them to gather additional funds to repay EPA.

The government agreed. The US Attorney, Patrick L. Meehan and his staff did not oppose Moshe Rubashkin's request.

Where's the money coming from?

After all, Moshe Rubashkin doesn't seem to have any income past whatever he gets as president of the Crown Heights Community Council.

You guessed it. Agriprocessors. Or, rather, his family, who get their money primarily through Agriprocessors and related businesses, like Nevel Properties, Rubashkins' Postville slumlord operation.

And the poor Rubashkins have been a bit cash-strapped lately, as you might imagine.

1. Why does Moshe Rubashkin need to remain free in order to repay the EPA when the money is coming from other family members?

2. Why would the government allow Moshe Rubashkin walk free (albeit on a $250,000 bond, with travel restrictions and without a passport), when Moshe Rubashkin has already served time for bank fraud and has a criminal history – including a history of violence – that precedes it?

To answer these question we need to look at how this case has been handled from day one, who the US Attorney handling it was, where that US Attorney is now, and the new date chosen for sentencing.

Moshe Rubashkin's arrest, his subsequent guilty plea, and now his sentencing delay have been little publicized.

Even though Moshe Rubashkin head an important city organization, one that receives state and city funds, his arrest, plea and continuing legal wrangling have received almost no attention in New York City.

And there may be a very good reason for that.

…Why it took the EPA to get this on the Feds agenda is an open question. It might be worth noting that the US Attorney for that region is a former aide to Republican Senator Arlen Specter, himself close to Lubavitch. This also may explain the relatively minor charges – after all, the Rubashkins flipped the mortgage to avoid paying taxes and fines, and they left extremely hazardous material unsupervised while at the same time removing valuable machinery from a building that would soon burn. One would think charges beyond illegal storage of hazardous waste and making a false statement would be possible, especially when state lines were crossed and postal services used in these crimes. And I believe other family members were involved, as well.…

Patrick L. Meehan is now a former US Attorney. He resigned to go into private practice:

PHILADELPHIA -- Conrad O'Brien Gellman & Rohn, P.C. is pleased to announce that Patrick L. Meehan, one of the most respected U.S. Attorneys in the country, has joined the firm as a shareholder effective July 21. His practice will focus on representing multi-national corporations and individuals in white collar criminal matters, internal corporate investigations and a wide range of corporate commercial litigation.

Mr. Meehan served as U.S. Attorney for the Eastern District of Pennsylvania since 2001. His work on public corruption, corporate and health care/pharmaceutical fraud and counter-terrorism has earned him national recognition. In fact, early on in his tenure, Mr. Meehan was selected by President George W. Bush to serve as one of six U.S. Attorneys on the President's Corporate Fraud Task Force.…

…When asked why he chose Conrad O'Brien to re-enter private practice, Mr. Meehan responded, "The firm has earned a reputation for handling some of the most sensitive, complex and difficult criminal and investigatory matters facing major companies, financial institutions and directors and officers around the country. I am excited about the opportunity to work with my predecessors and former colleagues from the U.S. Attorney's office, including former U.S. Attorney and U.S. District Court Chief Judge Louis Bechtle. The firm is widely regarded as having one of the most powerful teams for 'high stakes' litigation matters, and I look forward to working shoulder to shoulder with its outstanding lawyers."

Patrick L Meehan's jump to private practice was made public by Conrad O'Brien Gellman & Rohn on July 16, 2008 – the same day Moshe Rubashkin would have been sentenced.

Here is the press release Meehan sent out at the time of Moshe Rubashkin's indictment on September 12, 2007.

Missing is any connection Moshe Rubashkin has to the Chabad-Lubavitch-controlled Crown Heights Community Council. Also missing is his prior criminal record. 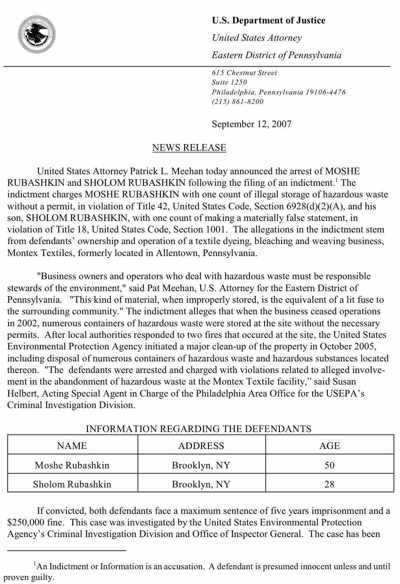 The request for a continuance for Shalom and Moshe Rubashkin's sentences went unopposed by Meehan's office. Here is Shalom's request. (The US Attorney's office claims both Shalom's and Moshe's requests are identical.)


November 3 is one day before the US national election. Keeping Moshe Rubashkin free until then also frees up some family cash to contribute to politicians.

And, as you may know, the extended Rubashkin family are large campaign contributors – including $20,000 to Patrick Meehan's former boss and political mentor Arlen Specter in 2004, as the feds were closing in on Moshe Rubashkin.

(The NY Post's original article is now missing from its website. I even did an archive search for Moshe Rubashkin's brother-in-law, Rabbi Milton Yehoshua Balkany as "Balkany" that came up empty. The Forward once had a blog post about Balkany's campaign contributions. It also disappeared.) 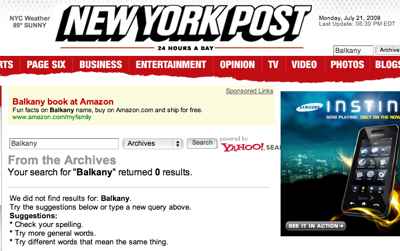 The Balkany family has given more than $100,000 in campaign contributions:

The Des Moines Register documented some Rubashkin campaign contributions, but missed the Balkany connection. It found Sholom M. Rubashkin, the CEO/VP of Agriprocessors, gave $23,750 from 2000 until the last year records are available, which I believe is 2006.

And, as far back as 2005, I documented heavy Rubashkin campaign contributions, both on a state level in Iowa and nationwide.

What does all this prove?

We still can't be sure. But it does appear that Moshe and Shalom Rubashkin received preferential treatment from a US Attorney closely linked to a Republican politician, himself with very close ties to Chabad-Lubavitch and the Rubashkin family.