How Dishonest Is The NY Times?

I posted Friday about a NY Times blog entry that had been edited by the Times to make Agriprocessors look good.

Here is what the entry originally said, with the now deleted parts highlighted in yellow and the editorial note added yesterday highlighted in green:

Can online video make you thin?

Maybe. If the thinspiration videos didn’t make you lose your appetite, the sickening animal-rights stuff on PetaTV and Go Veg might.

A lot of the film is from the 2003 meat-industry exposé, solemnly narrated by Alec Baldwin, called “Meet Your Meat.” I was going to post another one of those gross-out, animal-carcasses-on-parade videos, but I’m not sure what the status of those shock-vids is. Are they old, biased, staged, in litigation, too hot to handle?

Or are they right on the money — and should be putting people out of business and off meat for good?

Samantha Shapiro, who is writing an article on kosher dietary laws, says that there’s a cloud of controversy at least around the videos of AgriProcessors, a supposedly kosher slaughterhouse and meat-processing factory that has come under fire for inhumane, unkosher practices.

And yet. If you find the[se] AgriProcessors videos, or anything else you’re curious about, on PetaTV or Go Veg, you should see for yourself. I’m all for ideologues cataloging video online that purports to show the real story. Everyone gets to make a case, and exposés and even propaganda should never be against the law.

UPDATE, July 18: Parts of this piece have been edited. Initially, I misattributed insights about these videos to a colleague who is at work on a piece about kosher. I regret the mistake.


The Times closely monitors comments before publication. Yesterday, I left a comment linking to two Times news reports – the Times report on the initial release of the PETA video in 2004, and the Times report in early 2006 that broke the story of the USDA finding against Agriprocessors, in effect supporting PETA's charges.

I did not link or mention this blog, and I did not use my full name – I simply posted as Shmarya. I was not confrontational.

All I did was give the Times and its readers links to NY Times reporting that supports the contention that Agriprocessors had indeed engaged in inhumane slaughter.

My comment was not published, as you can see below. But what appears to be at least one 5WPR sock puppet comment, number seven, was published. The Times could easily check this out – but you can rest assured it will not do so.

The first comment may be from Rabbi Zalman Shmotkin of Chabad's Shluchim Office (the central office of Chabad-Lubavitch rabbi-representatives; the owners of Agriprocessors are Chabad hasidim and closely linked to Chabad leadership). 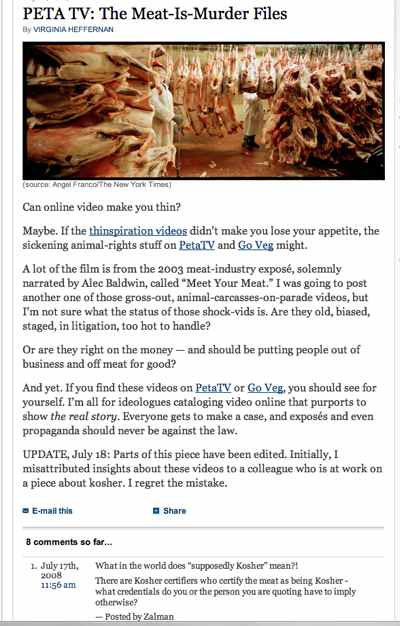 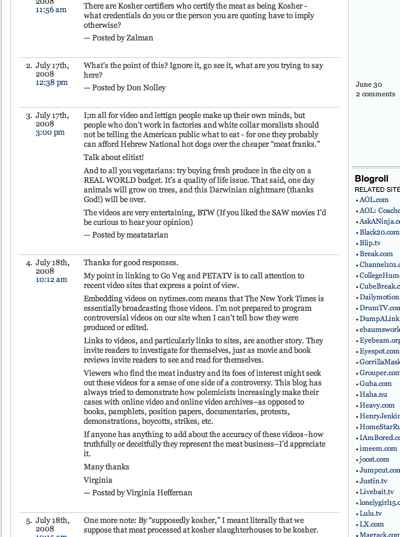 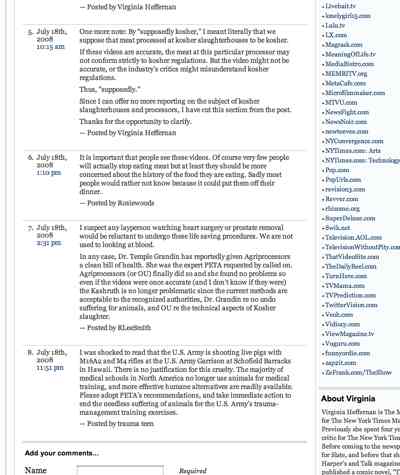 According to sources, Samantha Shapiro, the "colleague" Virginia Heffernan is apparently protecting, has been spotted having Shabbat dinner at a NYC Chabad House.

In and of itself, that does not disqualify her from writing an article on kosher food.

Even having her name removed from the entry doesn't do that.

But having Agriprocessors name completely excised from this NY Times blog entry, even though the Times own news reporting completely supports what was originally written about Agriprocessors, does.

Add to that the Times' complete dishonesty in refusing to publish links to its own news stories that support the original version of the blog entry, and you have dishonest, biased journalism.

And that, as I pointed out yesterday, is exactly what the Times coverage of haredim is.

How Dishonest Is The NY Times?