The man has a 30 year track record of seducing and manipulating women he counseled and taught. At least one of those women was very much underage.

He ran through a series of defenders in the Orthodox community until there were no more left. 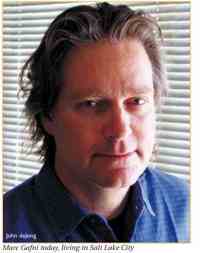 …Gafni admitted his wrongdoing, claimed to be withdrawing from public Jewish life to get counseling, and disappeared.

Now, two years later he has resurfaced in Salt Lake City. He's playing the victim, claims to have been set up and railroaded, and he has a whole new set of defenders – many of them non-Jews. The defense rests primarily on what his defenders call consensual sexual affairs with women he taught and counseled during the last years of his career and on a bizarre conspiracy theory that only holds together, to the little extent that it does, if you believe Gafni's personal account of events and take his paid consultants' word as truth.

What these defenders do not deal with is the long, clear record of abuse, manipulation, lies and deceit carried out by Gafni over his entire career.

Hanging out with shamans and practitioners of the "magik arts," Gafni has again found a group of people naive enough to believe his lies.

Catalyst Magazine, a Salt Lake City-based new age publication, has a laughable "exoneration" of Gafni in its July issue that focuses on the personalities of The Awareness Center's Vicki Polin and blogger Luke Ford.

No accuser of Gafni is spoken to. No victim is contacted. Indeed, no one critical of Gafni is quoted and exposé's on Gafni abuse – like Ma'ariv's and the New York Jewish Week – are ignored. In the business, this is what is known as a love letter, a piece that your very own PR person could have written.

Perhaps that is because for the past year, Gafni has been a columnist for Catalyst Magazine, writing under a pseudonym but with his true identity known to the editors. That Catalyst would allow someone like Gafni to write anonymously speaks to the magazine's lack of credibility and ethics.

1. Catalyst claims that Gafni passed lie detector tests administered by Gordon Barland. But Catalyst does not quote Barland or tell us what questions were asked.

2. Catalyst also claims "even by Israel’s strict standard, in no way did [Gafni] break the law." This is false. Gafni fled Israel as soon as the story about his clergy abuse broke. Israel rarely indicts non-violent criminals who have already fled the country. If Gafni tried to return to Israel, the legal process will restart.

Here is Gafni's explanation of his latest actions as quoted by Catalyst, notable for its disingenuousness:

“Of course, I regret with all my heart that anyone experienced hurt through their relationship with me. And, remember what Bono sings? ‘We hurt each other and we do it again.’ The key is what we do with our hurt,” Gafni says. “But what I most deeply regret is that I allowed myself to jeopardize the work we were doing by engaging in these relationships. I believed that what we were doing was sharing love, and that therefore there was nothing ethically, and certainly not legally, wrong. I still believe that. But I also recognize that a spiritual teacher has to hold strong boundaries around his personal life. Even mutual relationships with powerful and autonomous women are a problem for a public teacher. Moreover, in retrospect, our relationship did not serve the highest growth of these women; it endangered our movement and let down my supporters, friends and partners. In that sense—although I was unconscious of it at the time—they were unethical relationships and I regret that deeply.”

That's right. An Orthodox-ordained rabbi sleeping with multiple women (sometimes at the same time, each without the other's knowledge) he counsels and teaches views his actions as "sharing love" and sees "nothing ethically, and certainly not legally, wrong." All he sees is the damage the exposure of these "love-sharing" episodes had on his income and power. Like most abusers, it is all about me. It is never, ever about the people he hurt and the lives he ruined.

I met Mordechai Gafni on Purim in Jerusalem in 1994 or 1995. As I wrote previously, my reaction – which was shared by the Chabad rabbi whose home we were in, and by all the others present – was that Gafni was a con man and a fraud.

None of us knew then about Gafni's history of abuse. But his fundamental dishonesty was strikingly clear.

The man has a 30 year track record of seducing and manipulating women he counseled and taught. At least one of those women was very much underage.

He ran through a series of defenders in the Orthodox community until there were no more left.