Full statement from Uri L'Tzedek is reprinted below.

What is clear after reading that statement is that Uri L'Tzedek was, to say the very least, ill equipped to do the job it set out to do. The entire justification for canceling the boycott against Agriprocessors is…

…that Jim Martin, Agriprocessors new "compliance officer," has set up a worker hotline and has been promised at least one year on the job:

…In light of these early signs of reform, Uri L'Tzedek is withdrawing its call for the community to abstain from Agriprocessors' products. The social justice philosophy of Uri L'Tzedek is one deeply committed to challenging what is broken in our world and supporting those who take steps towards fixing it.

There are still matters of great concern in Postville, and we expect to move forward in good faith with Mr. Martin and Agriprocessors. If Agriprocessors does not implement Mr. Martin's recommendations, and is not in full compliance with all relevant laws, then we will once again raise our concerns with Agriprocessors and with you.


In other words, because Agriprocessors says it wants to reform, and because its new compliance officer promises reform, the boycott is off. No substantive changes have been made.

The truth is, Uri l'Tzedek members were threatened, they were put under tremendous pressure, and in the end they capitulated for one major reason – they were told that, if the boycott continued to exist and grow, Agriprocessors would shut down and – gasp! – Jews might eat treife (non-kosher) meat or, even worse, Jews would not have access to briskets for Shabbos and would have to "suffer" without.

I did not do much reporting on Uri L'Tzedek because I did not believe these kids had what it takes to get this job done. I thought much of their program was ill advised. And, even though I wanted to, I did not trust them.

Now you can see why: 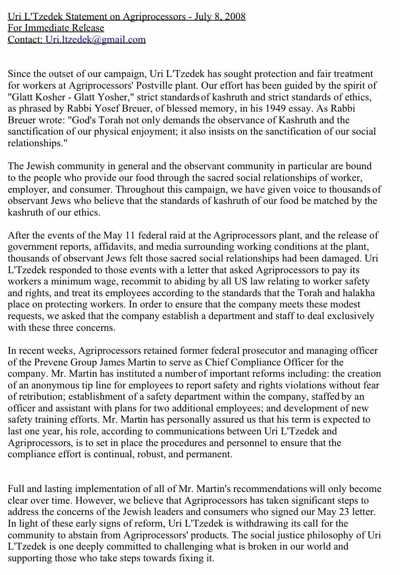 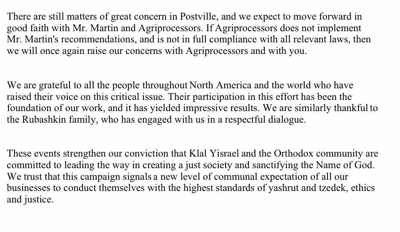 Note these kids thank the Rubashkin family for "respectful" dialogue when they made clear just a couple of weeks ago that Rubashkin representatives threatened them and were anything but respectful.

Note these champions of the oppressed do not address all the new allegations of worker abuse that have taken place under Jim Martin's tenure. (More here.)

This is the best Modern Orthodoxy has to offer – childish games, capitulation to threats, rib steaks over workers limbs. Pathetic.

Full statement from Uri L'Tzedek is reprinted below.

What is clear after reading that statement is that Uri L'Tzedek was, to say the very least, ill equipped to do the job it set out to do. The entire justification for canceling the boycott against Agriprocessors is…