The short answer, I think, is no – he can't be trusted, even though Rubashkin's new "Compliance Officer," Jim Martin is a former federal prosecutor with a sterling reputation.

But that reputation has now come into contact with Rubashkin and his PR machine and his rabbis, and Jim Martin is starting to look…

…less sterling by the second.

Here is Rubashkin PR flack Menachem Lubinsky's press release on Tuesday's meeting-turned-conference call staged by Rubashkin to dispel the "lies," "slander," and media conspiracy aligned against him, as posted on Yeshiva World:

An impressive group of Jewish community leaders participated in a 45 minute phone conference briefing last night on developments at Agriprocessors following the federal raid on its Postville plant on May 12th. Menachem Lubinsky, President of LUBICOM Marketing Consulting, whose firm represents Agriprocessors, reported that the plant’s production was approaching pre-raid levels and that shortages have eased significantly. He detailed the ongoing onslaught in the secular Jewish media by Conservatives, Reform and other liberal Jewish groups. “The daily barrage of stories, including faulting Agriprocessors for giving homeless people an opportunity to work were unprecedented,” he said. “In 35 years of practice, I have never seen such a methodical systematic lynch mob in certain Jewish media,” he added.

Jim Martin, a former US Attorney and the new compliant officer at Agriprocessors reported on the many dramatic improvements that were being made in compliance with government regulations. He stressed that he would have “zero tolerance” for anything less than full compliance. He detailed the reputable firms that were hired to retain workers, his hiring of a former OSHA official to deal with plant safety issues, and announced the launch of a new anonymous hotline for workers. Martin said that he would go beyond “fixing any violations” but was absolutely determined to make the plant a showcase of compliance and safety.

Prominent Washington attorney Nathan Lewin briefly discussed some of the legal implications of the raid and also criticized the secular Jewish media for incitement. He urged the Orthodox Jewish community to voice its strong opposition to the disinformation being spread by many secular groups. Many of the participants joined in this call to action. Aaron Goldsmith, a resident of Postville, described the witch-hunt by journalists in his town.

First of all, how "reputable" are those firms Agriprocessors hired to get it workers? According to the Iowa Independent, not very:

…Ryan Regenold, a spokesman for Des Moines-based Jacobson Companies, said his staffing company was relying on two Texas agencies, one in Amarillo and another in McAllen, for recruiting in that state.

"I represent Jacobson Staffing, and we were brought here on June 2 to basically bring in an entire new community -- at least that's how it seems," Regenold said. "There are two outside-sourced agencies that Agri is using that were bringing the people from Texas. As I'm sure most have already heard, they are coming in from Amarillo and McAllen. To shore up that, we are screening those people a little bit better, we will be starting to have them drug screened and background checked prior to their coming to Postville. The wave of people that you might have seen in the past, those causing the police chief to do a little bit of extra paperwork on his weekends, hopefully will begin to stop."…

In other words, at first Jacobson did not screen these people and took almost anyone its two partner agencies could ship.

But it's worse than just that:

One of the firms being utilized by Jacobson is Bravo Labor Agency in McAllen, Texas. Although the company's Web site has been taken off-line, a May 30 cached version of the page indicates that the firm began in 1987. One of the specialties highlighted by the firm is its ability to "lower overhead, with inexpensive labor from South Texas and Mexico." The site also indicates that "all workers" will be drug tested and interviewed, "if needed."

Are those workers from Mexico legal? Not likely. 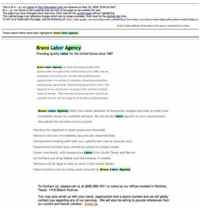 The website says, "Workers will be legal or able to work in the United States." "Or able"? I think it's more than reasonable to read that as "Workers will be legal or will have fake documentation that will allow them to pass as legal," especially since this statement follows another whopper: "All workers are drug tested and interviewed, if needed".

Regnold goes on to say his agency pays for the return trips of homeless who are not hired. But these homeless were promised return tickets from the get go, to use if they were not hired or did not like their jobs or living in Postville. But that and much more were lies:

In an interview on KPVL radio, Diana Morris said that she was one of about 15 people who were recruited from an Amarillo shelter. Morris said she was promised $10 per hour at Agriprocessors, 30 days of free housing and a $100 starting bonus. According to Morris, her employment at Agriprocessors came to an end on her third day when, at a doctor's urging, she phoned in sick. She claims that the housing was a four-bedroom facility without electricity or hot water that she was expected to share with 10 male roommates.

Morris told Iowa Independent on Monday afternoon that she had received her paycheck for the work she provided to Agriprocessors and that she was working with other organizations within the community to raise money for a bus ticket back to Texas.

"I was told that I have a place to stay for one more night -- that I'll be evicted tomorrow," she said. "I really hope that everything comes together and that I'll be able to get on a bus tomorrow and go back to Texas. This was a mistake. I believed a bunch of lies."

On Tuesday afternoon, Morris had collected enough money through donations for her return trip home.

The "bad apples" aren't the first to come to Postville for work at Agriprocessors only to seek exit shortly after their arrival. Labor Ready, a Waterloo staffing firm, cited health and safety concerns as the reason it pulled roughly 150 workers out of the Agriprocessors plant 10 days after they started employment there. Another group of workers from the company's Nebraska plant opted to return west, claiming the working conditions in Postville to be far inferior to their original location.…

But what Jim Martin's "reputable" companies and Agriprocessors did is worse than stranding and maltreating workers – they also left them hungry and begging for food:

Paul Rael, director of the Hispanic Ministry at St. Bridget's Catholic Church, said the church's resources for outreach have been severely taxed by all the newcomers.

"[St. Bridget's] operates a food pantry here in town and we've been wiped out on every occasion that we've been open," Rael said. "We have been serving well over 100 people each time that we feel we have zero responsibility for. ... I would plead that these people be given a better advance so that they can better take care of their needs."

Regenold said that Jacobson [Staffing, the company that recruited Rubashkin's homeless workers] does not provide any payroll advances to employees.

"You come here with an opportunity to work -- that's your opportunity to make money," he said. "I'm not going to make any promises or guarantees of money on advancements. Any arrangement that has ever been made with money has been put together directly with Agriprocessors."

[Getzel] Rubashkin, who was in the room and listened to Regenold's explanation of Jacobson policy, did not offer further comment in relation to employee pay advances.…

In other words, Jim Martin lent his credibility to people who accuse the media of "incitement," running a "witch hunt," and a "methodical systematic lynch mob," and non-Orthodox Jews of mounting an "onslaught" against Agriprocessors. And he also lent his credibility to companies that took homeless people from Texas to Postville and left them without money to buy food – and the company Jim Martin now works for, Agriprocessors, didn't feed them.

Jim Martin also lent his credibility to people who claim Agriprocessors production is close to pre-raid levels when that is clearly and unambiguously false.

Sharing the stage with others in Rubashkin's employ (even of that stage is a phone line) means Martin is endorsing their claims – unless he distanced himself from them. But he did not. According to reports, there was no objection from Martin to the language and tone of Lubinsky and Lewin or to the lies they presented as fact.

When you add to that the true nature of the call – the scheduled meeting was canceled because these great defenders of Rubashkin were not confident enough to appear before a crowd they did not wholly control, and the original number of invited attendees, thought to be over 100, was cut down to 20 closely selected friends of Agriprocessors for the conference call – you have a package that calls Martin's honesty and integrity into question.

Unless Martin's work is completely transparent and verified by an independent third party, there is no reason to trust him.

If Martin had stayed behind the scenes and not lent his name and participation to Rubashkin public relations, a case could be made to trust the man.

Instead, he jumped into the mud and slopped around with Lubinsky and Lewin.

The short answer, I think, is no – he can't be trusted, even though Rubashkin's new "Compliance Officer," Jim Martin is a former federal prosecutor with a sterling reputation.

But that reputation has now come into contact with Rubashkin and his PR machine and his rabbis, and Jim Martin is starting to look…