…"all applicable laws," as the Des Moines Register reports: 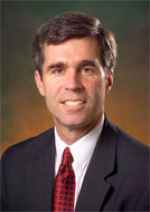 Agriprocessors, Inc. in Postville has hired a former federal prosecutor to monitor the meat company’s compliance with state and federal laws, a spokesman announced today.

Jim Martin, a former U.S. Attorney for the Eastern District of Missouri, will serve as the company’s corporate compliance officer starting immediately, according to a news release. Martin heads the Prevene Group, a St. Louis firm that helps companies comply with laws.

“Agriprocessors’ 800 jobs are important to Postville and northern Iowa, along with the observant Jewish community across the country that relies on them for meat and poultry,” Martin said in the statement. “Agriprocessors can meet the needs of those who depend on the company and operate in compliance with all laws, and I intend to see that happen.”

The new hire came less than a month after federal immigration agents stormed the kosher meat-processing plant in what was later deemed the largest single-site raid in U.S. history. Nearly 400 illegal immigrant workers were arrested, and 305 were charged with immigration-related felonies.

The bust also exposed allegations of physical and verbal abuse by the plant’s managers, though none have been charged. The company announced May 23 that it planned to hire a new CEO.

Heshy Rubashkin, the vice president for Agriprocessors, said: “We are pleased to have someone with the integrity and credentials of Jim Martin join our team. Retaining Jim and his team is part of an ongoing effort to improve compliance and safety performance. We take responsibility to our employees, to Postville and to the observant community very seriously.”

Martin investigated white collar and corporate fraud cases during his 21-year stint as a prosecutor, according to his biography on the Prevene Group’s Web site. He recently was recognized in “Best Lawyers in America” for corporate governance and compliance law.

“Obviously, selecting the right person for this job is critical,” Rubashkin said. “We are moving with deliberate speed to make the best selection as soon as possible. Hiring a new CEO and retaining an outside corporate compliance officer demonstrates our company’s commitment to meaningful change.”

The Prevene Group is a subsidiary of Armstrong Teasdale, a large St. Louis, MO-based law firm.