Who did Rubashkin's rabbis visit?

According to Shturem.net, a Chabad website, only one very special prisoner merited a visit: 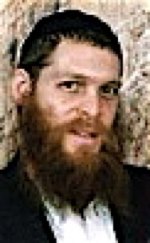 A week after Immigration authorities raided the Rubashkin plant in Iowa, a rabbinical delegation from Postville visited the jail in which one of the shochtim, Tal Ginter, is incarcerated. The visit was made possible afrter applying pressure on prison authorities and after they realized that the prisoner will not take anything in his mouth that is not kosher.

The visit was conducted under heavy guard and they were allowed to speak to Rabbi Ginter only through a glass window. He told the rabbis that although he is being treated well the conditions there are very difficult. He said that he chose to be in consolitary confinement in a cell1.20 meters by 2 meters so he could spend Shabbos alone.

no date for the trial has been set yet and the case can drag another 4 months according to officials in the plant. They said that they are employing every avenue and are doing their utmost to shorten the time. Please say Tehilim for the immdiate release of Tal ben Sarah.

Who did Rubashkin's rabbis visit?