In what is clearly a slap at Ashkenazi haredi led by Rabbi Yosef Shalom Elyashiv, Rabbi Ovadia Yosef – the leading Sefardic rabbi of this generation – says that conversions are being made…

Yosef: 'Conversion Courts are too stringent'

Preeminent Sephardi halachic authority Rabbi Ovadia Yosef said this week that conversion courts were being too inflexible and stringent with potential converts, according to sources close to the Shas mentor.

"Accepting the yoke of the commandments is essential for conversion," Yosef reportedly told a small group of Shas MKs and officials. "But we must not push off converts too much. It is not right to cause them pain by rejecting them."

According to the party's MK Haim Amsalem, who was present when Yosef made the comments, Yosef quoted from the Babylonia Talmud to prove that rabbis should be leni 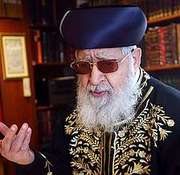 ent and welcoming with potential converts.

The Talmud (Sanhedrin 99-100) relates that the patriarch Abraham rejected Timna, who wished to become his concubine. Instead, Timna married Eliphaz, Abraham's great-grandson through Esau, and gave birth to Amalek, the Jewish people's archenemy.

Yosef said that from this passage in the Talmud we must learn to be more accepting of gentiles who wish to become a part of the Jewish people.

Yosef's comments come as a group of haredi Ashkenazi rabbis have launched an attack on the state-sponsored Conversion Authority for being too lenient.

Chief Sephardi Rabbi Shlomo Amar, who is responsible for conversions in the Chief Rabbinate, has also been severely criticized by the haredi community for backing the Conversion Authority.

Amar, one of Yosef's protégé's, has been under pressure to adopt more stringencies with respect to the acceptance of converts. However, Yosef's stance will give Amar the rabbinic backing he needs to stand up to this pressure.

Yosef's position also underlines differences in approach between Sephardi rabbis, who tend to be more lenient in their halachic rulings than haredi Ashkenazi rabbis.

In what is clearly a slap at Ashkenazi haredi led by Rabbi Yosef Shalom Elyashiv, Rabbi Ovadia Yosef – the leading Sefardic rabbi of this generation – says that conversions are being made…