A group of Neturei Karta members were demonstrating against the State of Israel in Jerusalem on Yom HaZikaron, the day of remembrance for fallen Israeli soldiers.

A non-haredi man carrying an Israeli flag approached the area – near Kikar Shabbat, Sabbath Square – where Neturei Karta was demonstrating. 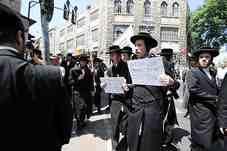 A Jewish man carrying an Israel flag was attacked Wednesday morning by members of the Neturei Karta group in Jerusalem. The man was rescued unharmed by plainclothes police officers.

Every year, in light of previous similar incidents, a plainclothes police force is deployed in the capital's sensitive ultra-Orthodox area throughout Remembrance Day and Independence Day.

Several minutes before the siren honoring Israel's fallen soldiers was sounded, a man in his 50s arrived at the Shabbat Square near the Meah Shearim neighborhood. He was wearing a skullcap and carrying a flag of Israel. Shortly afterwards, dozens of haredim gathered around him and tried to assault him, chanting slogans against Zionism.

A number of police officers deployed in the area who tried to rescue the man were also attacked by the haredim. In response, the police used pepper spray to disperse the crowd, but did not arrest any of those involved in the incident. There were no reports of injuries.

Yossi, one of the Neturei Karta members, claimed that "the man arrived in order to provoke us. We wanted to take his flag away, and suddenly two undercover detectives arrived and began beating us. They sprayed tear gas on the demonstrators' faces, including on an elderly person."…

True. There is no question the man's actions were both provocative and meant to provoke.

Still, the idea that haredim (even if only Neturei Karta haredim) could attack a man in Jerusalem for carrying an Israeli flag on a public street on Remembrance Day is to me nauseating.

And, for those of you who want to excuse this behavior by saying haredim were in Israel first, before secular or Religious Zionists, I'd point out the vast majority of the descendants of those original Israeli haredim are today Zionists, some religious, many secular.

As the Old Yishuv became strongly anti-Zionist in the early years of the 20th Century, it's youth (and, truth be told, many of its elders, as well) shifted allegiance to Religious Zionism or moderate, non-anti-Zionist streams of haredism. And others – many others – simply became secular.

In other words, the majority of the Old Yishuv supported the founding of the State of Israel. And they, too, were "here first."

A group of Neturei Karta members were demonstrating against the State of Israel in Jerusalem on Yom HaZikaron, the day of remembrance for fallen Israeli soldiers.

A non-haredi man carrying an Israeli flag approached the area – near Kikar Shabbat, Sabbath Square – where Neturei Karta was demonstrating.