You buy a retirement home across the street from a camp. For 10 years, everything is fine, no problems.

Then the camp is sold to Orthodox Jews. Now even neighbors one mile away from the camp complain about noise and huge banks of bright lights on all night, with loudspeakers blaring at 3 AM.

Who owns and runs the Orthodox camp?

Oorah, the same people who are behind the deceptive Kars4Kids organization. Capital News 9 reports:

GILBOA, N.Y. -- When Dave Lewis bought his hilltop hideout 11 years ago, he planned to spend his time there in peace and quite.

Since 2006 when the Oorah Catskill Retreat bought the camp that had been there for 50 years, Lewis has faced loudspeakers blasting and stadium lights shining right into his kitchen window at all hours of the day and night.

"I've taken pictures of myself in various places in the yard at two o'clock in the morning. It's like day light," he said.

Residents filing lawsuit against camp
A group of Gilboa residents is suing a summer camp that they say isn't being a good neighbor. They claim the Oorah Catskill Retreat is trying to push them out of their homes -- and there's nothing the village or county can do. Our Mark Repasky explains.

Joe Kraus said, "It is a nightmare. There are 97 of those high intensity lights."

Across the street, Barbra and Joseph Kraus are having the same problem. So are Dennis and Delores Byrnes who live almost a mile away.

Kraus said, "You know when the noise is because it's so loud the siding on the house vibrates."

The owners of Oorah are no strangers to complaints. Last June, the county Health Department shut it down for two days, and in July immigration authorities arrested 31 undocumented workers.

Mrs. Kraus said, "The value of our property has been destroyed."

Lewis and his neighbors have tried going to the camp but that hasn't worked. They've tried going to the Village of Gilboa and Schoharie County, but there's not much they can do there either because there's no ordinance on the books. Now, they're filing a $10 million class action lawsuit to see if that gets any results.

Mr. Kraus said, "Gilboa still functions like it's in the 17th century. We have no laws that protect the people from anything."

Mrs. Byrnes said, "The town lawyer had said if there was zoning in the town this wouldn't have been allowed."

Lewis said the camp is trying to force him out. But he's not packing up yet. This is the place where he planned to retire, even if it that means leaving during the best months of the year.

He said, "I'm just going to disappear for that six weeks. I have plenty of family that I can go visit."

We left several messages for the owners of Oorah. None of them were returned.

And then we have Oorah's deceptive fundraising tactics that have drawn the attention of news media in New York, New Jersey, Saint Louis and beyond. And they're percentage of dollars raised used for charitable purposes is quite low – only 38% last time I checked.

The camp also houses Oorah's "U Discover," a summer seminar for women 18 to 28 years old.

Even removing the massive amount of cash on hand (more than $7 million dollars), Oorah spent just over 50% of it's expenditures on programs. The rest, about 49%, went to fundraisinf expenses and the like.

If the calculation is done with the cash reserves counted, Oorah's expenditure for programs drops dramatically, down to about 30%. 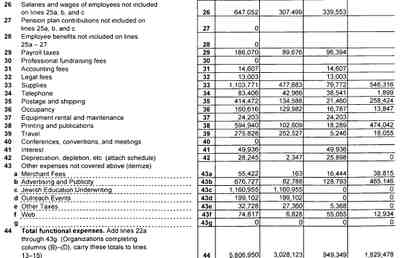 You buy a retirement home across the street from a camp. For 10 years, everything is fine, no problems.

Then the camp is sold to Orthodox Jews. Now even neighbors one mile away from the camp complain about noise and huge banks of bright lights on all night, with loudspeakers blaring at 3 AM.

Who owns and runs the Orthodox camp?