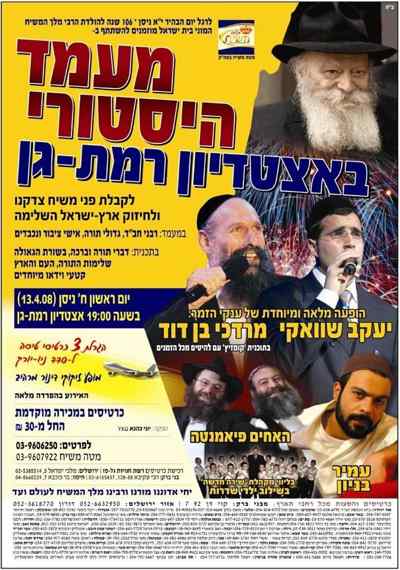 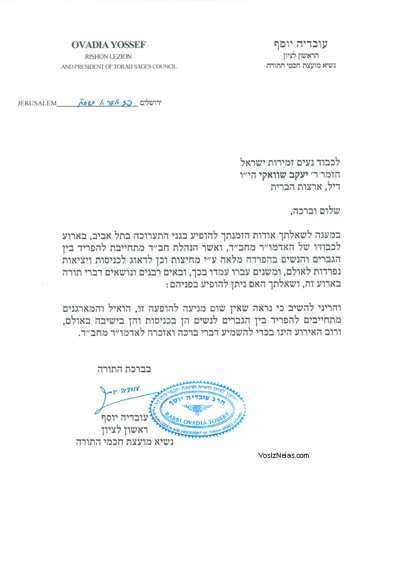 Both images can be clicked to enlarge.

Careful reading of the letter seems to show that Rabbi Yosef is not told this is a Chabad messianist concert. In fact, Yaakov Shweky seems to have told Rabbi Yosef the concert is sponsored by Chabad itself, which is not true. The organization is certainly made up of Chabad followers and considers itself to be Chabad. It also probably represents the feelings and beliefs of the majority of Chabad followers in Israel. But it is not an official Chabad organization. (Whatever that really means these days.)

Rabbi Yosef's only real concern is separation of the sexes.

VosIZNeais, which posted the letter and the concert poster without discussing the messianist angle of the story.

Both Shweky and Mordechai Ben David know what they are getting into – MBD has done these messianst events before, including "birthday" concerts just like this one.

Shweky seems to have told Rabbi Yosef that this concert is a memorial event, rather than a celebration of a dead but still living messiah.

For his part, Rabbi Yosef didn't seem to probe very deeply into the event itself – perhaps because his concern was Shweky's career and income.

This concert should not be banned because it is a concert and not a Torah gatherling, or because of "frivolity," or due to a potential for "licentiousness."

It should be banned because it promotes the belief that Menachem Mendel Schneerson, dead 14 years, is the living messiah who will redeem all Jews.

In other words, unlike the Lipa Ban, it isn't the music or the venue or the setting. It's not concerts or fun or entertainment – it is theology and the fundamentals of Judaism.