It seems Aish.com was hacked over Passover. At 12:30 AM CDT Tuesday, it is still down.

I was forwarded a message from an Aish subscriber that reads as follows: 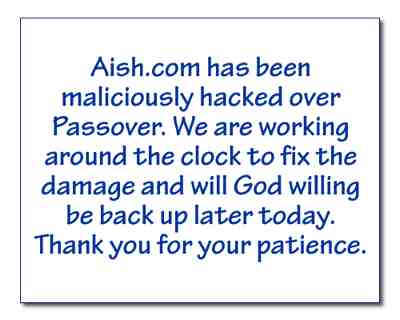 The Bank of Israel was also hacked over Passover and earlier Islamic Jihad claimed credit for hacking several smaller Israeli sites, as well.

During Passover, Aish.com was maliciously attacked by a group from Beijing, China. While our servers sit very safely behind firewalls, this group was able to exploit a bug in the web servers' operating code which allowed them to insert hyper-links on a handful of Aish.com webpages. Our hosting company, Terremark (also home to Google and YouTube) was able to identify the attack and exactly which files were effected. For safety sake, it was decided to completely restore the website from backup files that were dated before the attack. This required a lengthy restore process of hundreds of gigabytes of data on multiple servers and databases. The data was restored and verified for integrity and errors at every step in the process. Thank God, the website is now back up and the bug that the hackers were able to use has now been safely closed.

It seems Aish.com was hacked over Passover. At 12:30 AM CDT Tuesday, it is still down.

I was forwarded a message from an Aish subscriber that reads as follows: