« Haredim and Organ Donation, part 3 – Rabbi Elyashiv and the Angel of Death | Main | BREAKING: Jamacia Arrests Experts Sent To Evaluate Isaac Hersh – Hersh Tells US Embassy He Was Physically Abused By His Father, Michael Hersh, And Tortured At Tranquility Bay »

Did The Price of Kosher Meat Rise In The Past Months?

If it did, along with inflation, higher energy and feed costs, if you eat Rubashkin meat the reason prices rose could be because of this $1.4 million dollar judgement against Aaron Rubashkin and his companies, including Agriprocessors: 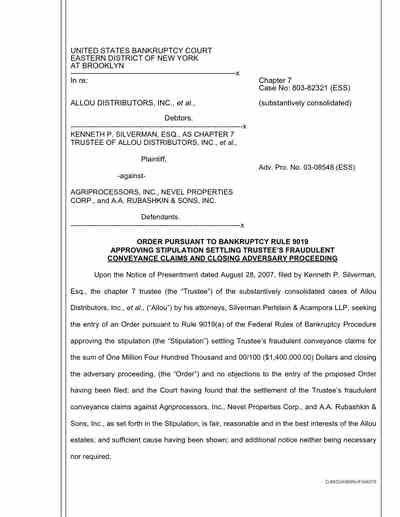 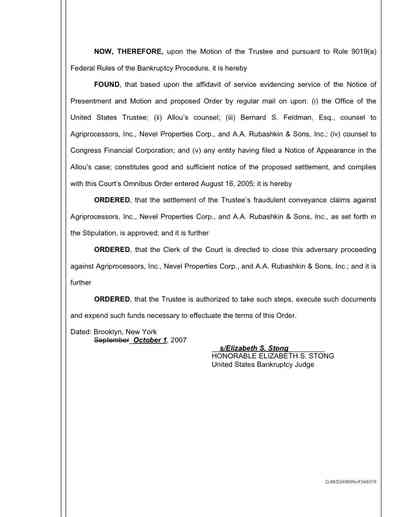 What you just read is a $1.4 million dollar judgement against Aaron Rubashkin and his various meat companies, including Agriprocessors, Inc. based in Postville, Iowa, and against Nevel, Rubashkin's real estate company. Rubashkin, I'm told, owns 10-20% of the housing stock in Postville.

What did Rubashkin do?

Apparently he 'sold' meat to the hasidic controlled Allou Healthcare – about $2 million dollars worth.

Problem is, Allou distributed healthcare and beauty items and was not in the food business.

In other words, Allou paid Rubashkin for product it did not sell.

This may be a kickback scheme of some type, similar to the money laundering scheme the Spinka Rebbe was arrested for.


Today, the United States Securities and Exchange Commission filed a complaint in the United States District Court for the Eastern District of New York alleging that Victor Jacobowitz, former Chairman of the Board of Directors of Allou Healthcare, Inc. ("Allou"), and four other former executives engaged in financial reporting fraud. The Commission's complaint alleges that beginning in the 1990s and continuing through March 2003, the defendants engaged in a scheme to defraud Allou's lenders and public investors. The defendants falsified Allou's accounting records, earnings reports, and periodic filings with the Commission by, among other things, materially overstating revenue and inventory. The complaint alleges that the defendants manipulated Allou's net income and earnings per share to meet Wall Street's expectations. The complaint also alleges that the defendants conducted this scheme, in part, for their own personal enrichment.…


Top executives of Allou Healthcare Inc. and related companies have pleaded guilty to crimes arising from a massive corporate fraud scheme at Allou.

The indictment obtained by the U.S. Attorney's office for the Eastern District of New York detailed a staggering, decade-long bank fraud and securities fraud scheme involving hundreds of millions of dollars of phony sales and grossly inflated inventory, and a mail fraud and insurance fraud scheme arising from a fire at Allou's Brooklyn warehouse involving a false insurance claim and the bribery of an undercover fre marshal to change the cause of the fire from "arson" to "accidental."

The related schemes resulted in losses to creditors, investors, and other victims in the amount of an estimated $160 million and ultimately drove Allou into bankruptcy.

Under the terms of their respective plea agreements, Herman Jacobowitz,45, Allou's chief executive officer, pleaded guilty to conspiracy to commit bank fraud, securities fraud, and mail fraud, and to a substantive count of filing a false annual report with the Securities and Exchange Commission , and faces up to 15 years' imprisonment and a maximum fine of up to twice the amount of the loss from the fraud.

The government's investigation revealed that Allou's top officers and controlling shareholders participated in a long-running corporate fraud scheme that looted Allou and plunged it into bankruptcy in April 2003, destroying the holdings of thousands of investors. Prior to its bankruptcy, Allou, which distributed health and beauty aids and pharmaceuticals, was a public company traded on the American Stock Exchange and was one of the largest companies on Long Island with approximately 300 employees and over $500 million in reported annual revenues.…

And then, you have this:

In the last three years, Agriprocessors has paid the Environmental Protection Agency and/or OSHA more than $750,000 in fines.

Did The Price of Kosher Meat Rise In The Past Months?

If it did, along with inflation, higher energy and feed costs, if you eat Rubashkin meat the reason prices rose could be because of this $1.4 million dollar judgement against Aaron Rubashkin and his companies, including Agriprocessors: