« Australian Rabbis Warn of Another Predatory Religious Figure, Urge Jews to Speak Out – But Only to Rabbis | Main | Haredim and Organ Donation, part 3 – Rabbi Elyashiv and the Angel of Death »

Who Is The Rabbi Behind The "Kidnapping" Of Isaac Hersh?

Rabbi Aron Schechter, the rosh yeshiva of Chaim Berlin in Brooklyn, that's who. He's the guy that didn't like the wig store posters and organized a boycott of the store. He's signed various bans, including the one against Lipa Schmeltzer.

And one more thing.

…a guy who refused to go to any beit din when summoned, including Rabbi Moshe Feinstein's. Despite this act, Rabbi Schechter was promoted by Agudath Israel of America to its Council of Torah Sages: 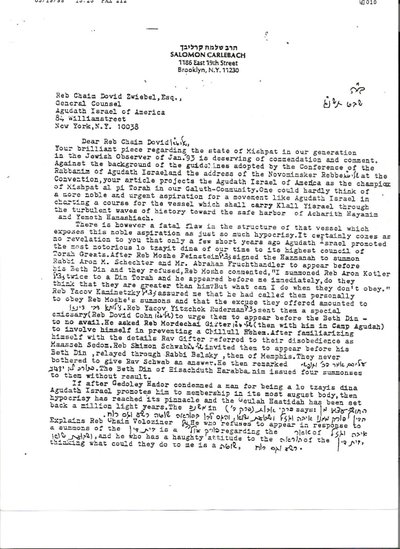 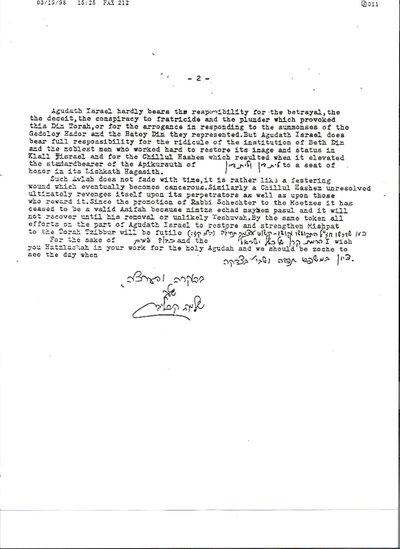 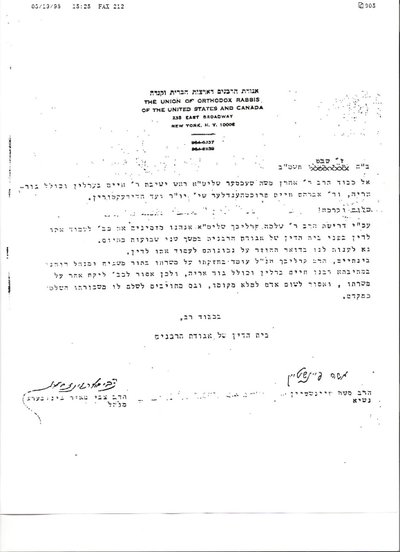 To the honorable Rabbi Aaron Moshe Schechter, head of Yeshiva Rabbi Chaim Berlin and Kollel Gur Aryeh and Reb Avrohom Chaim Fruchthandler, President of the Board of Directors:

Upon the claim of Rabbi Shlomo Carlebach [not the famous singer], we are summoning you to stand in judgment before the Bais Din of Agudas Harabonim within the next two weeks from today. Please respond by return mail as to your readiness to stand before us in judgment.

And what's up with Yeshivas Chaim Berlin?

STOX FRAUD WON'T FLY Ranch 1 owners used yeshiva in scheme
BY GREG B. SMITH DAILY NEWS STAFF WRITER
Tuesday, April 24th 2001, 2:21AM
A mob-controlled owner of the popular Ranch 1 fast-food chain cooked up a unique recipe for laundering cash - he used a Brooklyn yeshiva to hide the origin of bribes paid in a multimillion-dollar Mafia stock fraud scheme, according to FBI tapes.
James Chickara, co-owner of the Ranch 1 chain, has been captured on the undercover recordings saying he used the Mesivta Yeshiva Rabbi Chaim Berlin on Coney Island Ave. to launder bribes paid to brokers in the stock scams.
Chickara and Sebastian Rametta, who the FBI says are associates of the Colombo crime family, were co-owners of Ranch 1 when they were arrested in June in a mammoth "mob on Wall Street" bust.
Both men quietly pleaded guilty to stock fraud in Manhattan Federal Court three weeks ago. Rametta faces up to a year in jail, Chickara up to 16 months.
The school is run by Abraham Fruchthandler, a politically connected real estate developer.
An assistant of Fruchthandler, who has donated more than $22,000 to political candidates in the last four years, said he would not comment.
In their March 29 plea before Judge William Pauley, Rametta and Chickara admitted hiding an inflated commission paid to a broker to hype stock of their food retailer, Manhattan Soup Man, which they modeled on "The Soup Nazi" character of the TV sitcom "Seinfeld."
In talks secretly taped by the FBI, Chickara said that he twice wrote checks to the Brooklyn yeshiva and that school president Fruchthandler tapped into yeshiva bank accounts to give cash back.
The yeshiva got a fee for its services, and Chickara and Rametta were able to claim a tax deduction for charitable giving, according to a talk secretly recorded Dec. 14, 1999, between Chickara and an informant named Jeffrey Pokross.
"We donated money to his yeshiva," Chickara said. "Let's say we gave him a $100,000 check. ... Out of the yeshiva, he gave me back $75,000 or $80,000, actually $80,000 in cash."
Pokross: "And you get the tax deduction?"
Chickara: "Exactly."
Pokross: "And it's reliable?"
Chickara: "Yeah."
Before their arrest, Rametta was listed as Ranch 1's CEO and Chickara as its vice chairman. Since then, they have been removed from the executive suite, though Rametta continues working as a Ranch 1 consultant and both still own stock in the firm.
The company owns 60 restaurants, including 23 in New York City, selling what it terms healthy fast food such as flame-broiled chicken sandwiches. Current CEO George Naddaff said the company had no knowledge of any wrongdoing by Rametta and Chickara.
Rametta's lawyer, Edward Little, noted that in accepting his client's plea, prosecutors agreed to drop the mob-related racketeering charges.
Little also questioned whether Chickara actually laundered money through the yeshiva, though he couldn't say it didn't happen.
Chickara's lawyer, Robert Gage, did not return calls seeking comment.
The guilty pleas tarnished the image of respectability the men have carefully maintained in cobbling together several multimillion-dollar business deals over the last decade.
The two sold Arnie's Bagelicious Bagels to Quaker Oats in 1994, took the profits and started Ranch 1 in 1996. They brought in several big-name investors, including John Sculley, former CEO of Apple Computers.
At the same time, according to tapes made by the FBI, they were hanging around gangsters from the Brooklyn neighborhood where they grew up.
In a Jan. 26, 2000, taped conversation, Chickara said he and Rametta had "been around" Anthony (Gaspipe) Casso, the homicidal ex-underboss of the Luchese crime family.
After Casso was arrested, Chickara said on the tape, he and Rametta became associated with William (Wild Bill) Cutolo, a Colombo capo who disappeared in 1999.
By last year, Rametta and Chickara were working with Bonanno crime family capo Robert (Little Robert) Lino to take Ranch 1 and Manhattan Soup Man public in a mob-orchestrated pump-and-dump scheme, according to court papers.
On tape, Chickara said the mob would do well in the deal. He noted that his Mafia handlers got a $500,000 payment when they sold Arnie's Bagels to Quaker Oats and said the Colombo crime family stood to profit from Ranch 1 and Manhattan Soup Man as well.
"They'll make money with Ranch 1, they'll make money with soup," Chickara said. "Basically, anything we do, we try to give them something. And always to stay on good terms."
Sidebar:
In describing how he laundered cash as part of a Mafia stock fraud scheme, a former Ranch 1 executive said he used a religious school as the conduit and netted a hefty tax break in the process. Here's how he said the scheme worked:
1 Write a check for a charitable donation to a yeshiva called Mesivta Yeshiva Rabbi Chaim Berlin on Coney Island Ave. in Brooklyn. The yeshiva is run by a friend.
2 The friend gives back 80% of the check in cash. The yeshiva keeps 20% as a fee.
3 Pay off brokers and stock promoters with the cash. Brokers hype worthless stock until its value crests, then insiders sell off, sending the stock crashing. This is called pump and dump.
4 The Ranch 1 executive claims a tax break for the charitable donation to the yeshiva.

Previous post on Isaac Hersh "kidnapping."
[A special hat tip to UOJ who culled all of this information together and posted it on his website. Kol HaKavod!]

Who Is The Rabbi Behind The "Kidnapping" Of Isaac Hersh?

Rabbi Aron Schechter, the rosh yeshiva of Chaim Berlin in Brooklyn, that's who. He's the guy that didn't like the wig store posters and organized a boycott of the store. He's signed various bans, including the one against Lipa Schmeltzer.

And one more thing.