« Should This Man Be CEO of Hatzalah? | Main | UPDATE: Burka Woman Child Abuser Said To Be Head Of Burka Women Cult, Rabbanit Keren »

Remember those 'holy' Jewish women who adopted the veils, burkas and hijabs of their Arab neighbors in order to be "holy" as God "demands"?

…her own children. Worse than that, she apparently did not report multiple incestuous relationships and abuse between her underage children.

And the best part is, she refused to remove her veil and show her face in court for reasons of sniut, modesty.

A 54-year-old Israeli mother of 12 was under arrest Tuesday for allegedly severely abusing her children, police said.

The mother was also suspected of failing to report multiple cases of incest among her children. 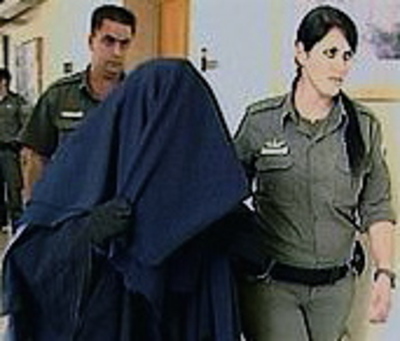 The suspected child abuser was apprehended after police were summoned to her Beit Shemesh home last month by neighbors, who heard  a child crying for help and objects being broken in the house, a police investigator told a Jerusalem court during a remand hearing Tuesday.

Police, with the help of social workers, soon uncovered a history of brutal physical abuse against several of the children, which included whippings with belts and electric cables, according to the police officer's testimony.

The mother was also suspected of breaking her daughter's nose with a rolling pin, and of preventing her children from receiving medical treatment for their injuries, according to court documents.

The woman's husband was abroad seeking charity donations, and had not yet returned to the country for the court hearing on Tuesday.

When the abuse case was first discovered last month, only two of the couple's 12 children, who range in age from 8 to 33, were living at home.

The two children, one of them a disabled teen, were removed from the house by social workers, the police investigator told the court.

When the family's children were subsequently treated by social workers, it emerged that the teens had committed incest with each other, he said.

The teenage boy who was removed from the house told social workers that he had sexual relations with his 18-year-old sister, and that he had told his parents as well as his Rabbis, but the latter told him not to tell anybody.

The Jerusalem Magistrate's Court extended the mother's remand by six days by on Tuesday. The defendant, who was covered in layers of clothing, did not speak in court.

Her attorney, who successfully attained a court order barring the publication of his client's name, explained that the woman "did not speak with men," and that he would speak on her behalf, according to a court protocol of the proceedings.

The judge rejected the attorney's request to place the woman under house arrest instead of keeping her in police detention, citing investigative material which presented a very difficult case of physical violence and abuse.

Mabat TV news report. (It's in the first five minutes.)

[Hat Tip: A Mother In Israel and JBM.]

UPDATE 3-26-08 4:00 am CST: The arrested woman is said to be the head of the burka cult herself, Rabbanit Beruriah Keren.

Remember those 'holy' Jewish women who adopted the veils, burkas and hijabs of their Arab neighbors in order to be "holy" as God "demands"?