Even I'm upset about this.

A scholar has done extensive literary analysis and some major historical digging. What he's found may rock the very foundations of… 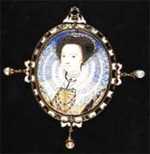 Not only did William Shakespeare not write the plays that bear his name, a Jew did. And not just any Jew – a Marrano woman, Amelia Bassano Lanier, the 'Dark Lady' of Shakespeare's Sonnets.

Sounds like a purim shpiel, doesn't it? But it's not.

Briefly, here some of the reasons (fully explained by the scholar, John Hudson, over on Jewcy) why John Hudson believes Amelia Bassano Lanier wrote the plays:

1. Shakespeare did not have the musical knowledge to write the plays, which quote ancient musical manuscripts and show a profound knowledge of music.

2. The plays show a familiarity with spoken Hebrew, yet no one in England at that time spoke Hebrew – except Marranos.

3. Feminism seen throughout the plays.

4. The plays show a familiarity with Italian. Shakespeare did not speak or understand Italian.

5. She was a major Poet and some of her unique use of language can be seen in the pays.

7. Her lover was Shakespeare's patron.

8. Jewish Allegories are found in the Plays.Interview over at Jewess with the (non-Jewish) scholar.

Posted at 04:08 AM in Books, Religion, Religion & State | Permalink

Even I'm upset about this.

A scholar has done extensive literary analysis and some major historical digging. What he's found may rock the very foundations of…